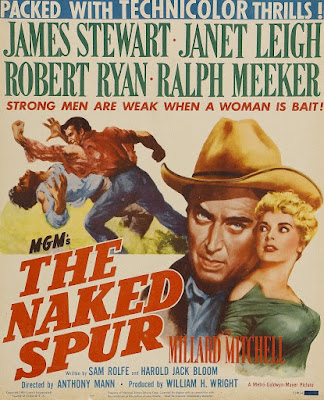 High in the Colorado Rockies, bounty hunter Howard Kemp (James Stewart) pursues killer Ben Vandergroat (Robert Ryan), enlisting the help of craggy prospector Jesse Tate (Millard Mitchell) and Roy Anderson* (Ralph Meeker), a cavalryman dishonourably discharged, whom he encounters along the trail. The trio succeed in capturing Ben and his ward Lina (Janet Leigh) and set off home to Abilene, Kansas, intending to collect their reward and see him hanged. Ben, however, delights in sowing the seeds of discontent among his captors, exploiting the tensions within the group to play the men off against one another as they cross perilous Blackfeet Indian country. 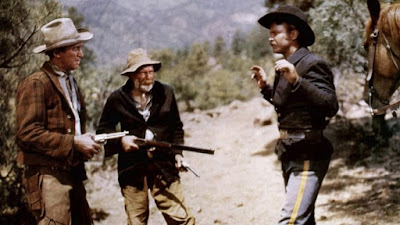 Showing at the BFI Southbank as part of the venue's psychological Western season, Ride Lonesome, The Naked Spur was the third of Stewart's Oater collaborations with director Anthony Mann and stands as one of the darkest in its genre. Clearly an ancestor of Scottie Ferguson, Kemp suffers delirious night terrors over the memory of a woman who once betrayed him, selling his land out from under him while he was away at war. Scarred and embittered, Kemp hopes to use the bounty on Ben to buy back what was once his, kicking over the ashes of his path, ideally with Lina as his new ranch wife. A tormented and not especially likeable hero, Kemp proves to be the lesser of two evils when the chatty and jovial Ben finally reveals himself to be every bit the vicious, nihilistic murderer we'd been expecting. Ryan is magnificent as Vandergroat, relishing the mind-games with his would-be jailers - cheering on Anderson's lechery towards Lina and preying on Tate's greed to lure him to his death. 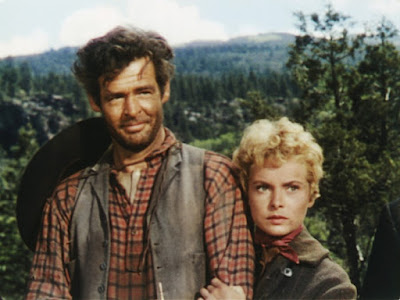 The interplay between the five actors is magnificently handled by Mann, whose deft hand teases out the subtleties in Sam Rolfe and Harold Jack Bloom's Oscar-nominated screenplay. Leigh suggested that the naturally conflicting personality types among the cast, stranded in the wilderness together on a tough location shoot, did much to boost the film's intensity. William C. Mellor's bright Technicolor cinematography likewise accentuates the sublime scenery, its majesty in contrast to the hardscrabble lives of Mann's flawed and desperate characters. A riverside shoot-out at the finale makes the most evocative use of violent gushing rapids this side of Deliverance (1972) or The Revenant (2015).

*Not to be confused with the deliciously deadpan Swedish director of A Pigeon Sat On A Branch Reflecting On Existence (2015), a delightful if, admittedly, irrelevant coincidence.
Posted by Joe at 14:34 No comments: 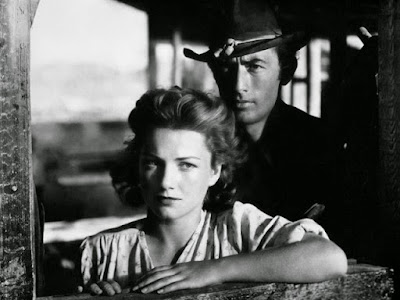 William A. Wellman's Yellow Sky is currently showing in London as part of the BFI Southbank's Shakespeare On Film season to mark the quatercentenary of the Bard's death and is well worth seeking out if you're in the vicinity.

Very loosely based on The Tempest (1610), as Fred M. Wilcox's sci-fi classic Forbidden Planet (1956) would be eight years later, Wellman's Western is taken from a novel by pulp maestro W.R. Burnett and tells of bank robber James "Stretch" Dawson (Gregory Peck) and his gang, who wind up in the titular ghost town and become embroiled in the affairs of its only residents, an aged prospector (James Barton) and his tough granddaughter, known as "Mike" (Anne Baxter). Given the dilapidated state of Yellow Sky, the men realise the only reason Grandpa and Mike have stuck around is to safeguard the former's secret stockpile of gold. Dawson fancies a share of the spoils but struggles to rein in his ill-disciplined crew, at least one of whom lusts after Mike. Matters come to a head when dandy killer Dude (Richard Widmark) emerges as a serious challenger to Stretch's authority and an army of drunken Apaches appear over the horizon.


Reaction to Yellow Sky was highly positive upon its initial release, with the New York Times's Bosley Crowther noting thematic similarities with the previous year's Treasure Of The Sierra Madre (apparently Darryl F. Zanuck had the same idea and originally envisioned Walter Huston as Grandpa). Variety was also keen, praising the "earthy" script for demonstrating "an understanding of the hungers of men".

Yellow Sky is certainly surprisingly upfront about gang member Lengthy (John Russell) and his intention to rape Mike at the first opportunity, a constant threat hanging over the narrative from the moment he sets eyes on her. We have little doubt that Mike can handle her own and don't have to wait long before she floors Dawson with a jab to the jaw and wrestles him to stand-still in the dirt. She later brawls with Lengthy in a creek as it becomes clear that this "he-girl" in jeans has had to adopt a tomboy act in order to survive the West. Her falling for Dawson, ultimately a rather principled chap, is a matter of easing the repression of her femininity and learning to trust someone other than her elderly guardian in order to realise her true self and blossom. This process is capped, quite literally, at the film's close after the bad guys have been routed and Dawson has gone straight: he presents her with a floral bonnet, a gift she receives with delight. Civilisation has dawned on Yellow Sky and the future looks bright. 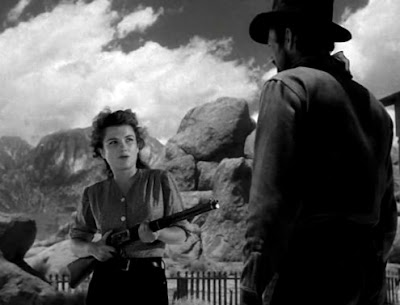 Wellman's film is crisply shot by Joe MacDonald - who would also serve on another Western reworking of Shakespeare, Broken Lance (1954) - and contains a number of memorable images: the gang's escape across the salt flats, starved of water; a toppled roulette wheel in the ironically-named Eldorado saloon spinning to a stop as Dude is killed; the pouch at his belt "bleeding" gold dust like the sands of time; Stretch's reverse bank robbery to square his debt to society. 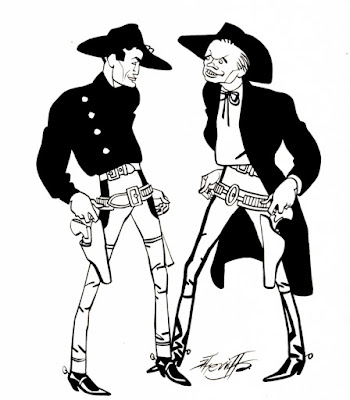 The ever-underrated Baxter is especially lovely here as a gun-totin' Miranda and Peck as staunch and stoic as you'd expect. Widmark, of course, brings effortless menace, as the Punch cartoon above nicely conveys. Was there ever a leaner heavy?
Posted by Joe at 11:52 No comments:

Labels: Alfred Newman, Anne Baxter, Gregory Peck, Harry Morgan, Joe MacDonald, Richard Widmark, W.R. Burnett, Western, William A. Wellman
Newer Posts Older Posts Home
Subscribe to: Posts (Atom)
"Other people, so I have read, treasure memorable moments in their lives... What I remember is the time John Wayne killed three men with a carbine as he was falling to the dusty street in Stagecoach, and the time the kitten found Orson Welles in The Third Man"
Walker Percy, The Movie-Goer