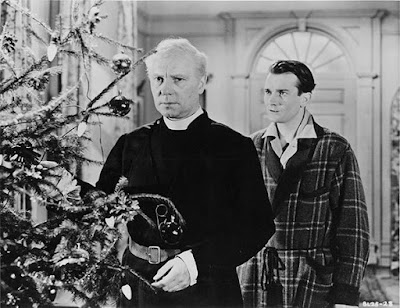 This unjustly forgotten British Christmas picture from Alexander Korda's London Films proves to be astonishingly fresh 63 years on - thematically speaking, at least - and well worth a revisit.

Directed by George More O'Ferrall from a hit West End play by Wynyard Browne, the film tells of Norfolk parson Martin Gregory (the great Sir Ralph Richardson), whose brood of disgruntled children return home for the festive season. Alcoholic fashion journalist Margaret (Margaret Deighton) and wayward soldier Michael (Denholm Elliott) privately resent their father's neglect in favour of his parishioners and the years they've spent shielding him from the complications of their adult lives. They also blame the widower for failing to look after himself, requiring their self-sacrificing old maid of a sister Jenny (Celia Johnson) to stay on at the vicarage as his unofficial housekeeper at the expense of her own happiness. The siblings, however, underestimate the old man's capacity to understand their respective angsts, the latter proving to be a great deal more worldly than the hapless, irrelevant, bookish caricature they treat him as.

Hardly like to win favour with a generation who insist on Die Hard (1988) as their go-to Christmas classic, The Holly & The Ivy may be genteel and fustily old fashioned but nevertheless has much to say about veiled resentment and its corrosive impact on grown families that should chime with audiences today. Adapted by Russian writer Anatole de Grunewald to bring a Chekovian psychological rigour to Browne's original, there's a proto-Kitchen Sink grit about Margaret's backstory concerning the death of a child born (shockingly for the period) out of wedlock, the reason for her morose drinking bouts. The success of this bold and unflinching scenario is due to the considerable emotional pull of Margaret Deighton's tough performance, down but not out. As with the recently revived Brief Encounter (1945), the fate of Celia Johnson hangs in the balance and again we fall for it thanks to the actress's understated loveliness.

It's Richardson though who really sells the thing, giving a typically affecting performance of enormous charm and subtly. His misunderstood man of god railing against the vulgar commercialisation of Yuletide and expression of profound doubts over whether or not he's valued by his community or has succeeded at all in making a meaningful contribution to their lives ensure that The Holly & The Ivy remains prescient and interesting, even if the world it seeks to depict has largely vanished.

Sure, O'Ferrall's film is a more than a little creaky and stagebound in its execution and the snowy rural England it depicts the preserve of cards and chocolate box lids only, but it's a lovely bit of work all the same. I'd put it right up there with It's A Wonderful Life (1946), The Bishop's Wife (1947) and Scrooge (1951) among seasonal comforts.
Posted by Joe at 15:40