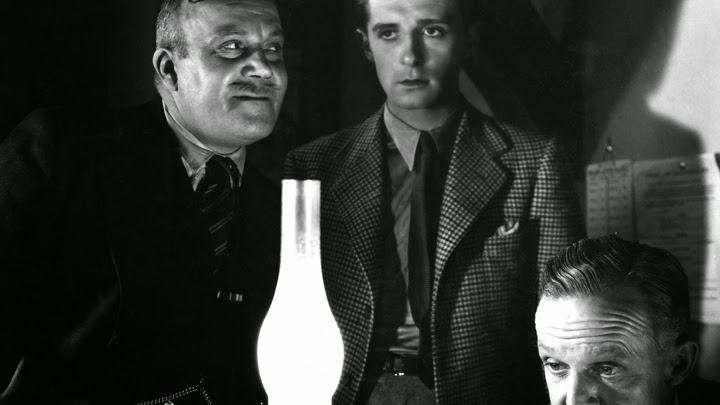 Here's a rare thing. A "quota quickie" sci-fi from Fox British dating back to 1935, which tells of the fictional Essex hamlet of Shrimpton-on-Sea, unceremoniously plucked from the face of the earth by the sheer velocity of a passing "dead star" and which thereafter becomes a planet in its own right, Shrimpton-in-Space. The locals initially refuse to believe the truth when it's presented to them by postmaster Harold Drake (Eliot Makeham, an accountant in another life), but are finally forced to face facts, whereupon a class war breaks out between the socialist yokels and the landed gentry who have assumed power with a predictable air of entitlement.

Once In A New Moon's outlandish Wellsian premise is taken from Lucky Star (1929), a novel by travel writer and historian Owen Rutter, a former bureaucrat with the North Borneo Civil Service who was so obsessed with the Mutiny on the Bounty that he wrote no less than six books on the subject. However, its plot is merely a pretext for the gentle political satire that unfurls, putting mild-mannered Drake at odds with Viscount Bravington (Morton Selton), a purring old Tory keen on brown sherry and prone to smoothing down his lustrous white moustache when vexed. Bravington - a genteel hobbyist in the manner of P.G. Wodehouse's Lord Emsworth at Blandings - is being bullied into striking up a civil war by his fearsome wife (Mary Hinton) when he'd clearly rather spend his days organising a cherished stamp collection. Fortunately, the comet reverses its effect before anyone on either side is seriously hurt and the village duly crash lands in the North Sea just east of Scarborough.

This delightful little curiosity - bringing cosmic intrigue to Little England in a manner not altogether dissimilar to Simon Pegg and Edgar Wright's recent The World's End (2013) - comes from director Anthony Kimmins, a veteran of multiple George Formby vehicles, who shows laudable ingenuity in getting a great deal done with almost no budget to speak of, a no-name cast and just a 63 minute running time. Kimmins succeeds in presenting us with a complete village's worth of distinct if clearly allegorical characters and  develops a pleasing sub-plot about Drake's doting daughter (the lovely René Ray) being pursued by the rebellious young lord of the manor (Derrick De Marney) despite his snooty parents' disapproval, a scenario always popular with W.C. Fields.

Those looking for overt social comment or insights into the broader 1930's context from Once Upon A New Moon may be disappointed, although there's a striking moment during a newspaper-montage sequence - intended to show Britain's aghast response to Shrimpton's disappearance - when one of the other prominent headlines featured on a frontpage reads: "Nazi Terror in Vienna". One wonders if Once In A New Moon were well enough known to have been an influence on Ealing's later Went The Day Well? (1942).
Posted by Joe at 16:32