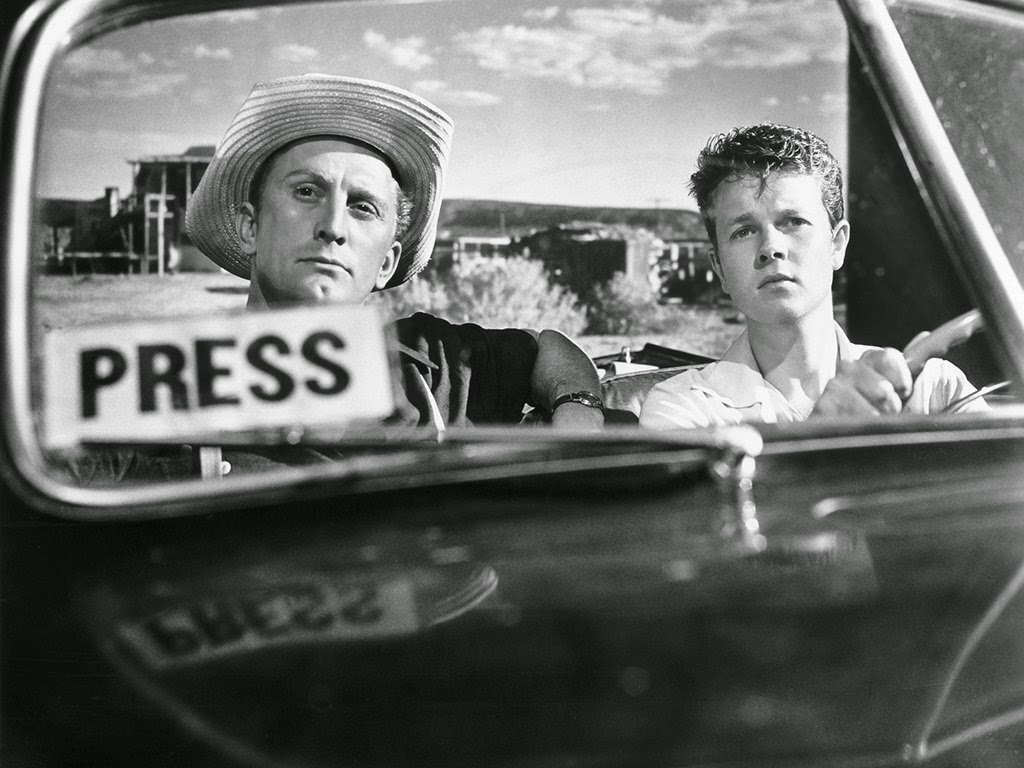 What is it about the New Mexico heat that drives men to complete moral collapse? Long before Walter White took to the desert to cook crystal meth in his underpants, washed-up Big City reporter Charlie Tatum (Kirk Douglas) was kicking his heels in the orderly offices of the Albuquerque Sun-Bulletin, dreaming of his ticket back to the big time. And then he found it.

Charlie exploits the case of Leo Minosa (Richard Benedict), a local man who has become trapped in a cave while potholing for Indian relics, a routine accident that Tatum whips up into a media frenzy, which soon goes national and benefits all concerned. Except of course poor Leo, slowly dying in the dark while the punters roll up outside to watch the protracted rescue operation, happily paying the ever-rising parking toll, chewing hot dogs and riding the Ferris wheel while they wait. Charlie positions himself at the heart of this queasy carnival, with exclusive access rights to the invalid. He's in cahoots with corrupt sheriff Gus Kretzer (Ray Teal), the sort of man to delight in a pet rattle snake, which he keeps cooped up in a shoe box, not unlike old Leo. Tatum and Kretzer ensure that Minosa's rescue is affected in the most time-consuming manner possible, by drilling downwards into the cave from above rather than through its blocked ground level entrance, thereby ensuring that their "human interest" story gets a full week's run, regardless of what's in Leo's human interests. 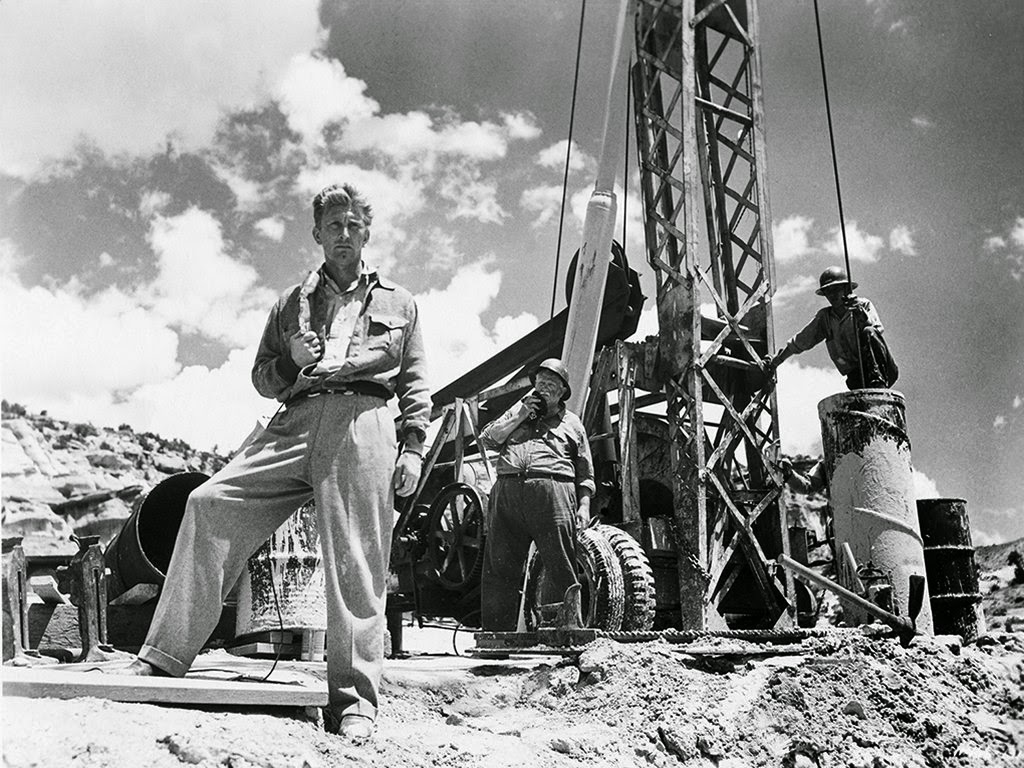 Part of the tragedy of Leo Minosa is that he takes solace from the belief that his wife Lorraine (Jan Sterling), with whom he runs the nearby diner and gas station, is grieving for him and doing all she can to engineer his release. This isn't so. Lorraine, a bored, dishwater blonde in the vein of Cora from The Postman Always Rings Twice (1946), is actually planning to leave Leo and only relents when Charlie points out how much she stands to gain from the situation. Like Tatum, she's an urbanite from back east who feels as buried alive in the desert as her husband is beneath those rocks. She's disgusted by the fur stoll that Leo instructs Charlie to give her as a present and is clearly attracted to the journalist's ruthlessness and dynamism. It's the greed and self-interest of Tatum, Lorraine and Sheriff Kretzer that ultimately seals the injured man's fate, not the boulders crushing his legs. 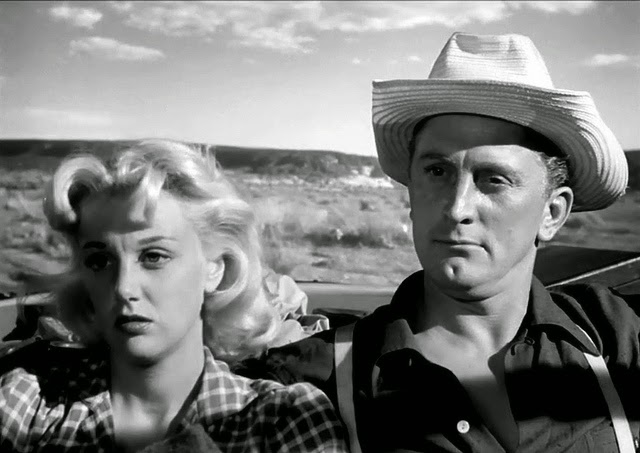 Billy Wilder's Ace In The Hole is often branded with adjectives like "cynical", "acidic", "corrosive" and "vitriolic" and was angrily attacked by The New York Times and Hollywood Reporter upon its original release. But, in my humble opinion, this is one of the few really honest depictions of the amoral world of journalism out there. I'm not even sure it's a satire. Wilder is merely following the cosily embroidered dictum of Tatum's editor, Jacob Q. Boot (Porter Hall): "Tell the truth". Charlie's knowingly exploitative tactics and crowd-pleasing turn of phrase are still run-of-the-mill today in a profession that thought it justified to hack the voicemails on a murdered girl's phone, even if it meant hindering the police investigation into her killer.

It's no surprise to learn that Ace In The Hole was in fact based on a real incident - the tale of W. Floyd Collins, alluded to by Charlie Tatum in the film, who was trapped in a Kentucky cavern by a landslide and turned into a star by Louisville Courier-Journal reporter William Burke Miller in exchange for a Pulitzer. Wilder's film has lost none of its relevance in the online era, with widespread coverage of recent mining disasters in Chile, China and Turkey showing that its story still has currency with sensation-hungry readers. Wilder would return to the subject of murky hack work in 1974 with a remake of Ben Hecht and Charles MacArthur's Depression-era play The Front Page, which has a more comic flavour but is nonetheless full of devastating lines. As fine as Jack Lemmon and Walter Matthau are, that film lacks the tour de force that Kirk Douglas displays here. The man is simply incredible throughout, driving the film just as Charlie drives his media circus. When Tatum finally slumps to the floor - following in the footsteps of Walter Neff from Double Indemnity (1944) as a walking wounded desperate to make confession - we feel as exhausted as he is. Charlie's tragedy is that his grand masterwork has cost a man his life and all been for nothing: New York newspaper boss Nagle (Richard Gaines) has lost interest and won't take his calls.
Posted by Joe at 10:53 No comments: 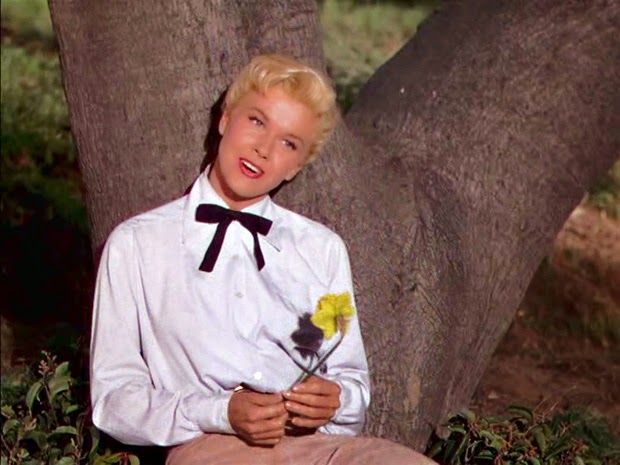 Is Calamity Jane the campest thing that's ever happened? Well, perhaps not. But between Ancient Sparta and this 80's music video by Baltimora, Doris Day was butching it up in deer skins and a cavalry cap and belting out 'The Deadwood Stage' for the ages.

Within the first ten minutes of David Butler's celebrated musical for Warner Brothers - an answer to the box office success of MGM's Annie Get Your Gun (1950) - we've already been treated to the sight of Day's seemingly asexual tomboy heroine roughing up barflys and mild-mannered thespian Frances Fryer (Dick Wesson) entertaining the liquored-up patrons of The Golden Garter in full drag. 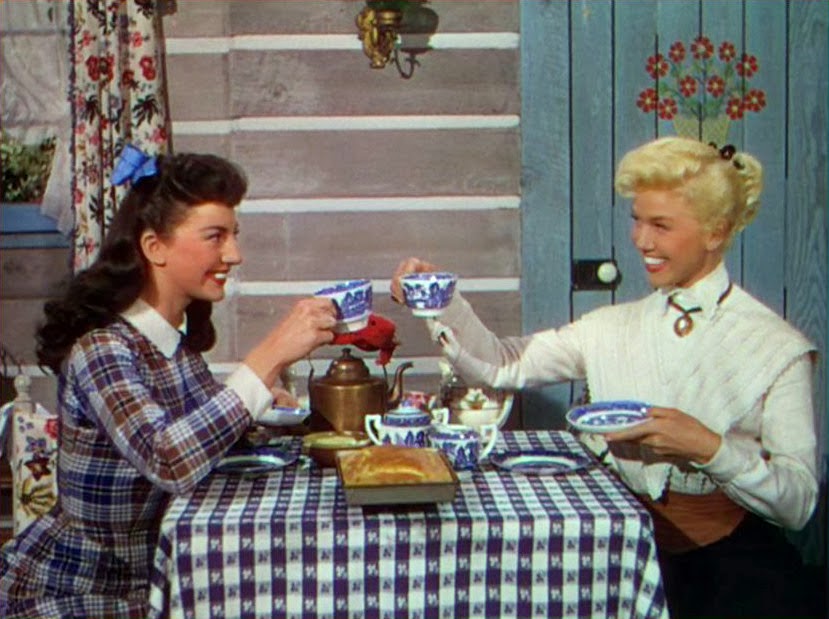 Fryer has been mistakenly booked when the punters wanted vaudeville pin-up Adelaid Adams (Gale Robbins), prompting Jane to head east to Chicago to rectify matters. Her subsequent fish-out-of-water scenes in the Windy City include an extraordinary episode in which an amused prostitute catches Jane's eye with a come-hither glance, to which she responds with bemused but unmistakable curiosity, the first stirrings of a Sapphic sexual awakening. Her return with Katie Brown (Allyn Ann McLerie), another wannabe mistaken for Adelaid, results in the sudden blossoming of an intimate friendship between the two women, which in turn serves to rouse Jane's dormant femininity. The ladies, soon looking every inch the lesbian couple, give Jane's dilapidated cabin a makeover and sing a duet entitled 'A Woman's Touch' while Jane hammers together the furniture and Katie finesses the interior decor. And then, to cap it all, Jane ventures out onto the hillside alone, wearing manly duds, to close the film with 'Secret Love', apparently about her feelings for Wild Bill Hickok (Howard Keel), that Mr Darcy of the Black Hills. It's not really though, it it Jane dear? 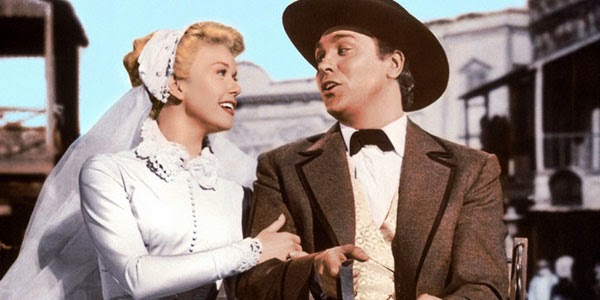 However much of a delight this wildest of romps is for its first two-thirds, the fun couldn't go on forever. This was 1950's Hollywood, after all, and so, inevitably, a conservative moral is tacked on demanding that Jane put down her phallic six-shooter, start wearing pretty dresses, cease all that "female thinking" and settle down with Bill. It's a disappointing if predictable conclusion to a joyous production whose gender-bending antics would prove a gentle forerunner to Nick Ray's weirdo feminist Western Johnny Guitar, released the following year. 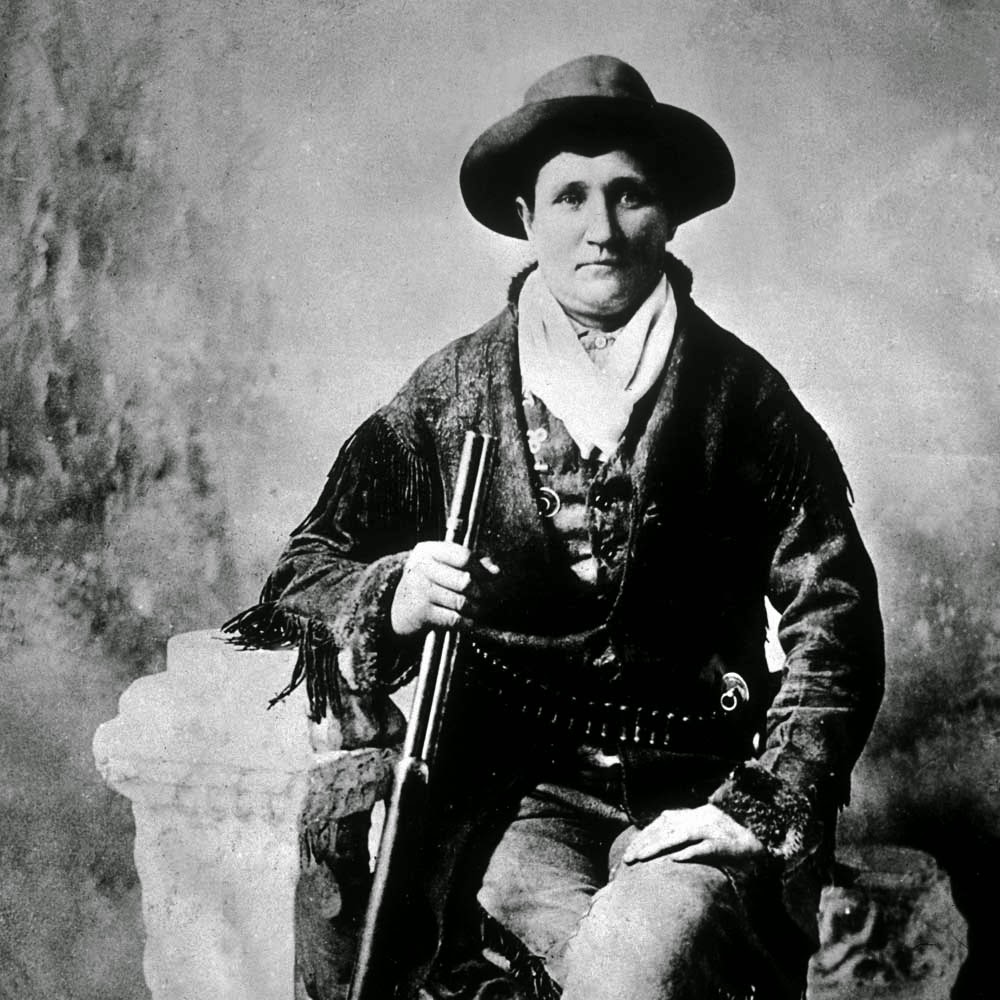 What is ultimately most remarkable about Calamity Jane - apart from its cheery disregard for historical accuracy (see the real Jane above) - is Doris Day. The singer turned actress is so astonishingly bright, so swashbucklingly athletic and so utterly unselfconscious, it's quite breathtaking. She swings in and out of moving stagecoach windows with all the carefree ease of the young Errol Flynn, leaps onto saloon bars mid-song and is even lassoed from the ceiling at one point. No leading lady working today would be capable of a comedic performance of this sort and it's a crying shame that Day is so terminally out of fashion. A talent to be treasured, whether or not this sort of business is your bag.
Posted by Joe at 18:49 No comments:

Labels: David Butler, Doris Day, Howard Keel, Musical, Western
Newer Posts Older Posts Home
Subscribe to: Posts (Atom)
"Other people, so I have read, treasure memorable moments in their lives... What I remember is the time John Wayne killed three men with a carbine as he was falling to the dusty street in Stagecoach, and the time the kitten found Orson Welles in The Third Man"
Walker Percy, The Movie-Goer