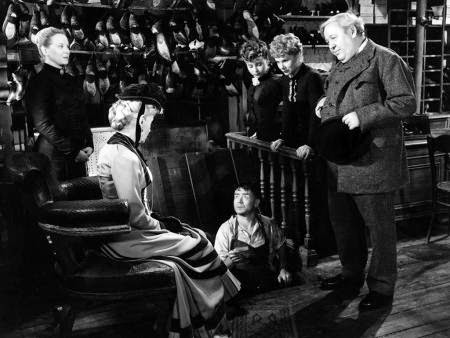 Behind every great man, there's a great woman. In the case of Salford leathersmith Will Mossop (John Mills), that lady is Maggie Hobson (Brenda De Banzie), the eldest daughter of his boss, the blustering Henry Hobson (Charles Laughton). Whom she's also behind.

Unbeknownst to anyone but herself, the headstrong Maggie has decided to make a project of Will, marrying him, teaching him to write and encouraging him to found his own bootmaking business to build a better life for both of them. In so doing, Maggie realises both his potential and her own, the ploy enabling her to break free from a life of thankless toil beneath the heel of her complacent father, who expects her to pick up where his late wife left off. For Hobson has loudly and publically written Maggie off as a Plain Jane, an old maid, a young spinster. His is a cruel and entirely selfish line of reasoning because Hobson knows all-too-well how invaluable Maggie's managerial skills and good sense are to the running of his house and business. This pompous boozer has held her back for too long while his youngest girls (Daphne Anderson, Prunella Scales) are rewarded for their uselessness with independence. For the ageing patriarch, faced with mortality and the demise of his cobbler's empire, this is King Lear. For Maggie, this is a simple Cinderella story in which her own sudden self-realisation stands in for the want of a fairy godmother.

Hobson's Choice was the celebrated David Lean's final black-and-white film and his last to be set in England. Made for Alexander Korda's London Films, it shares some of the grime of his earlier high gothic masterpiece Great Expectations (1946) but, sadly, little of that work's magic, despite the best efforts of its star and the endearing earnestness of the underrated De Banzie, touchingly vulnerable beneath her forthright veneer. Hobson's Choice is too reliant on accents for charm ("By gum!") and too modest and insubstantial a tale to stand up to scrutiny. Laughton's biographer Charles Higham pinpointed the problem when he said: "Neither David Lean nor Alexander Korda was suited to the task of turning this timeworn regional farce into a satisfactory film. Lean's chilly, academic, and formalised approach, and Korda's tendency to opulence and exaggeration combined to create a highly artificial, lush and overripe version of a story which should have been treated with warmth, simplicity and austerity if it were to work at all". Higham goes on to argue that Lean was the wrong class to be making a film about the "harsh decency" of plucky Lancastrians, but perhaps that is taking matters too far.

Laughton is said to have lost confidence in the project midway through and had a lifelong loathing for alcoholics deriving from a childhood spent growing up in his parents' Scarborough hotel. The scene in which Hobson drunkenly pursues the moon's reflection through a series of puddles in the cobblestoned street is nevertheless a lovely bit of silent clowning, even if it does appear to belong to another film entirely.
Posted by Joe at 18:52