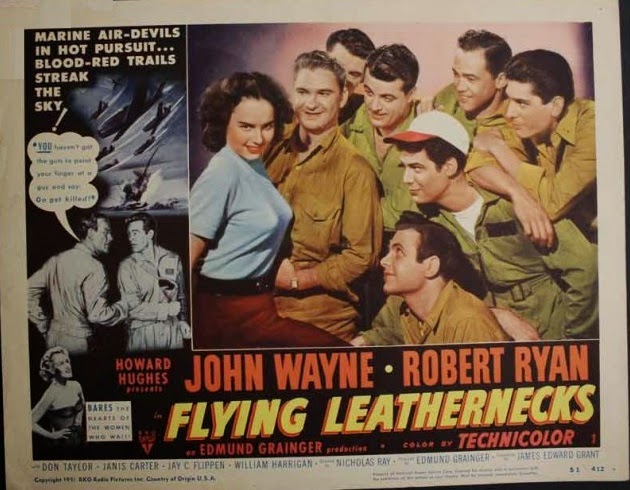 You've got to love this hilariously misleading poster for Nicholas Ray's World War II action caper Flying Leathernecks. That temptress with the weirdly out-of-whack rack really has very little to do with John Wayne and Robert Ryan's increasingly bitter bickering over Marine Corps management styles in the bamboo base camps of the South Seas.


Ray's film for RKO is a fairly uncomplicated salute to the airmen who served in the Guadalcanal campaign in 1942, with Wayne's disciplinarian Major Kirby inspired by the real-life Major John L. Smith, a legend in his field. Bankrolled by madcap millionaire and noted aviation nut Howard Hughes, Flying Leathernecks packs in plenty of Technicolor action spectacle as the Cactus Air Force squadron do battle with "Jap Zeroes" high above the Pacific, much of which features real combat footage spliced in. Although shooting in colour helps to convey the balmy tropical heat of this theatre of war, black-and-white might have done Ray more favours when it came to concealing the obvious studio cockpit sets and back projection during the film's airborne scenes. Nevertheless, such episodes as the Battle of Okinawa would doubtless have thrilled ex-servicemen and impressionable boys in movie houses across America during Leathernecks original run. 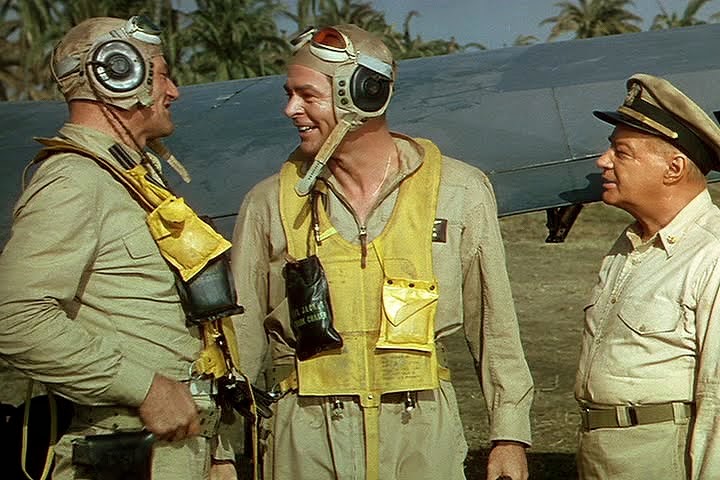 Those left unimpressed might still enjoy the conflict at ground level between Kirby and Captain Griffin (Ryan), a very mild riff on the Captain Bligh-Fletcher Christian face-off in miniature, only with more hugging and learning. Kirby's a hard-but-fair taskmaster, weighed down by the hard decisions he has to make and not interested in winning any popularity contests, while Griff still wants to be one of the boys. Flying Leathernecks champions conformity and insists that group solidarity is all important: any pilot who displays too much individuality, notably Texan hee-haw Cowboy (Don Taylor), or otherwise capriciously disobeys orders can be sure to find himself unceremoniously blasted out of the sky sooner or later. In this highly conservative context, Griff must come around to Kirby's way of thinking, quit drinking saké and shelve his sentimentality before he can progress in the Marine Corps, a prize Flying Leathernecks appears to value. Which is odd, as the army is otherwise portrayed as a rigid, faceless bureaucracy, with the industrious kleptomania of Sergeant Clancy (Jay C. Flippen), who nabs everything not nailed down, from cakes to tents, served up as subversive humour at its expense.
Posted by Joe at 10:56