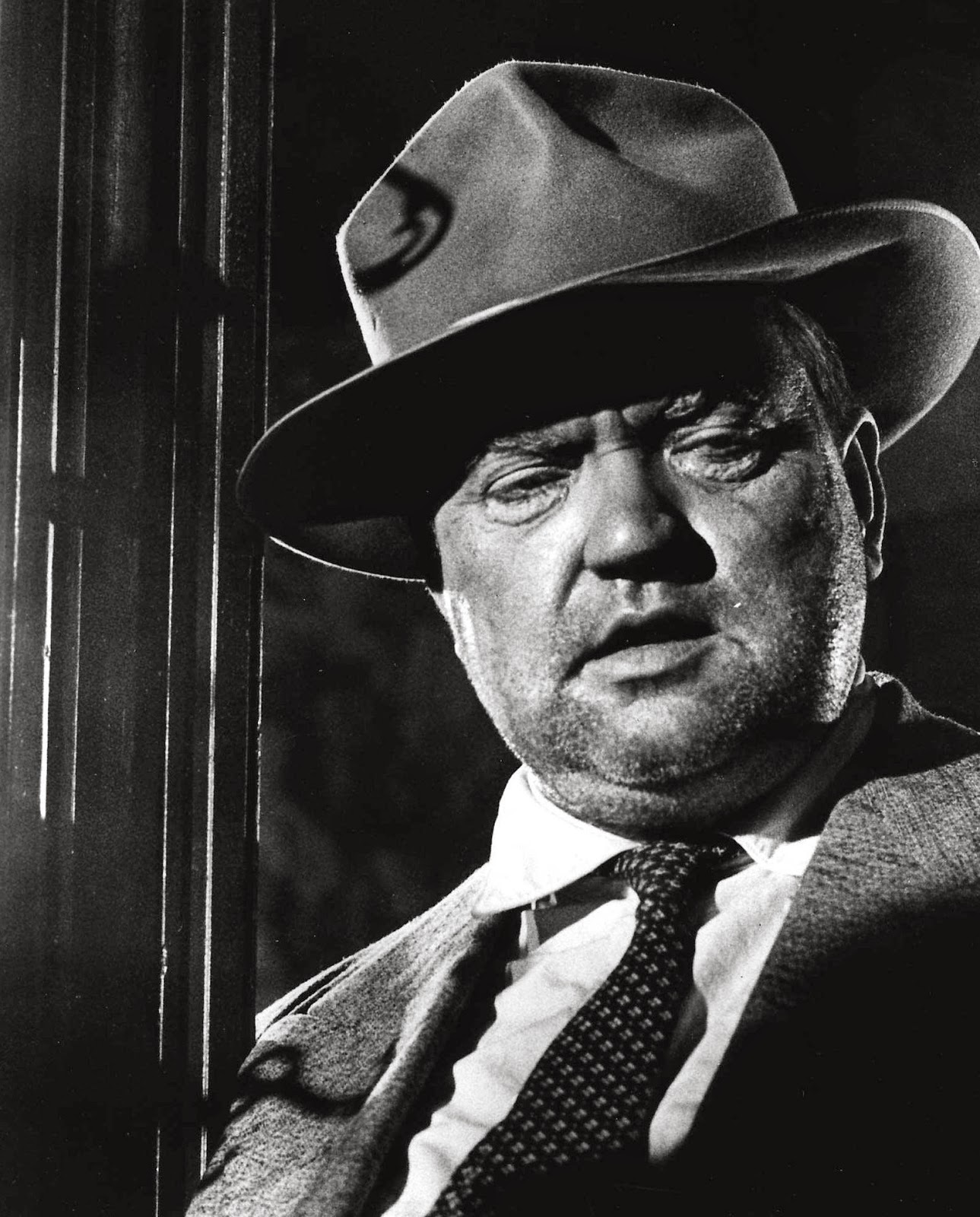 “You should lay off those candy bars... You’re a mess honey”.

So says brothel madam Tana (Marlene Dietrich), assessing the portly, dishevelled form of police captain Hank Quinlan (Orson Welles) in the nightmarish border country noir Touch Of Evil, based on the Whit Masterson novel Badge Of Evil (1956). The lady has a point. In his drinking days, Hank was a regular at Tana’s, but tonight she hardly recognises him. Propped up against the doorway to her parlour, unshaven, perspiring in the evening heat, Henry Mancini’s haunting pianola playing in a distant room, Hank is certainly in bad shape. “I wish it was your chili I was getting fat on”, he wheezes, wistfully, squinting at her through glinting porcine eyes. Improbably cast as a Mexican under a raven black wig, the cheroot-smoking Dietrich was rarely more ravishing, while Orson never looked worse. The cherubic prince of Citizen Kane (1941) is long dead.


Quinlan is ostensibly visiting Tana to make inquiries about the car bomb that killed an American couple in the film’s bravura opening tracking shot, the incident that has led newlywed Mexican narcotics cop Miguel “Mike” Vargas (Charlton Heston), a witness, to dog Quinlan’s every step as he carries out his investigation into the attack. One suspects Hank’s revived interest in Tana is only partly professional: he’s always been a slippery customer, as Vargas is about to find out. Even Quinlan’s long-time partner, Pete Menzies (Joseph Calleia), doesn’t know the half of it. He and Hank have been solving cases for 30 years, frequently after uncovering a last minute clue that all-too-conveniently supports one of Quinlan’s legendary “hunches”, with Pete refusing to countenance the possibility that his friend could be systematically planting evidence to ensure they get their man, even if it isn’t necessarily the right man. 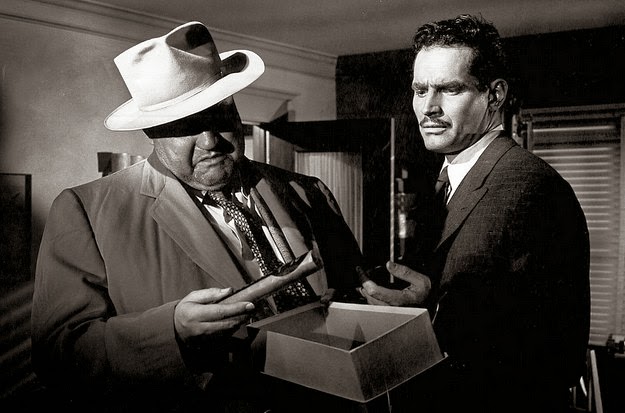 In a wry cameo as a detective, Joseph Cotten warns us that we won’t like Quinlan. The man himself duly arrives, oinking orders and puffing on a plump stogie, shot from below to underline both his enormous bulk and sneering air of authority. The Rabelaisian captain, a “reformed” alcoholic and unreconstructed racist, turns out to preside over this moonlit Tex-Mex nowhere town like Hades in the underworld, stabbing his walking stick into its dirt precincts and lurching passed the saloons, storefronts and oil derricks in pursuit of his own perverted conception of justice. His bloated physique speaks of the current corruption of his soul, but that limp is a reminder of his war service in 1917, a souvenir from the last time he acted in a mood of genuine public-spiritedness. Look where that got him. Early on, Hank belittles the D.A. (another Mercury Theatre veteran, Ray Collins) for arriving at the crime scene in an expensive “monkey suit”, introducing us to the idea that this man does entirely as he pleases and answers to no-one, least of all his decadent superiors or anything so fundamentally absurd as the rule of law. Despite having resided in this corner of the world for decades, Hank has refused to learn Spanish and immediately treats the interloping “foreigner” Vargas with suspicion and contempt. He later slaps suspect Manolo Sanchez (Victor Millan) before framing the boy for the bombing with a shoebox full of dynamite from his own turkey ranch. Hank’s failure to counter or conceal his prejudice will ultimately prove his downfall. 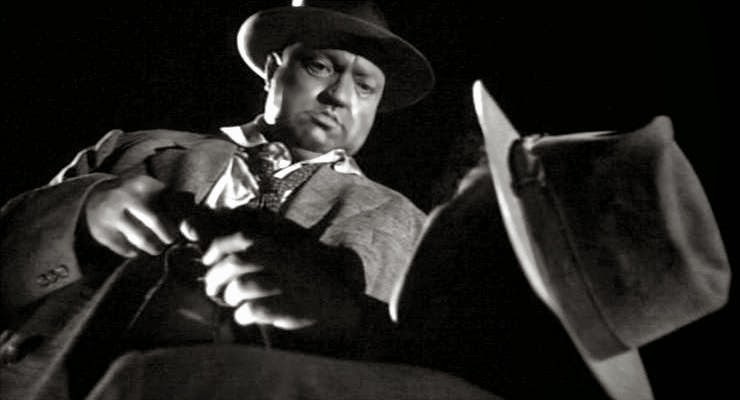 For the truth about Hank Quinlan is this: the Fat Man has never gotten over the murder of his wife, strangled by a “half-breed” some years before, a tragedy that has fuelled his pathological hatred of Mexicans ever since. Hank’s violent murder of Uncle Joe Grandi (Akim Tamiroff) by the same method, choking him to death in a drunken frenzy while Vargas’s doped wife Susan (Janet Leigh) lies oblivious nearby, is his latest attempt to turn back the clock and enact his revenge on the phantom hoodlum who did away with Mrs Quinlan. “I followed around after him... ate my heart out trying to catch him but I never did. That was the last killer that ever got out of my hands.” This scene is a bad trip, but its implications are even more horrific: Quinlan has been quietly waging a private race war in honour of his late lamented love ever since, of which this is only the latest skirmish. The irony that Hank himself should be caught out by his leaving a tell-tale piece of evidence at the scene - his own cane, the discovery of which prompts Pete to finally accept the truth and aid Vargas in his entrapment ploy - is a blackly comic one indeed.


In the end, as appalling as his actions have been, the big waddling baby who dies creekside from Pete’s redeeming bullet after Vargas’s plan has gone awry might just deserve reappraisal as a sympathetic monster, a good man embittered and eaten up by a cancerous horror from the past that he was helpless to prevent and has been unable to avenge. He has abused his power and ruined the lives of many innocent parties, but he wasn’t always this way. Evil begets evil. “A great detective”, pronounces Al Schwartz (Mort Mills), looking down from the bridge at his slumped cadaver. “A lousy cop”, counters Tana, before famously concluding: “He was some kind of a man... What does it matter what you say about people? Adios.” 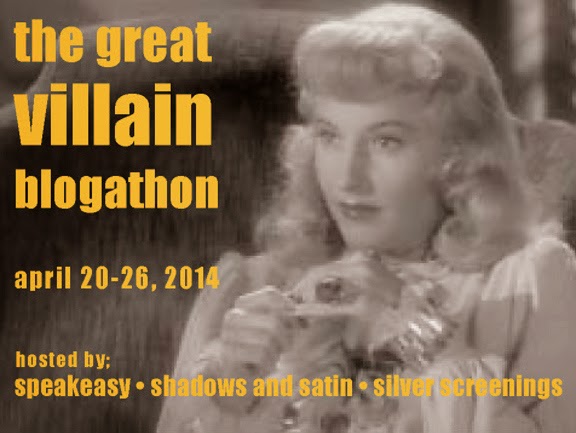 This post is part of the Great Villain Blogathon hosted by Ruth of Silver Screenings, Karen of Shadows & Satin, and Kristina of Speakeasy — see all the movie baddies at any of these three blogs
Posted by Joe at 10:09