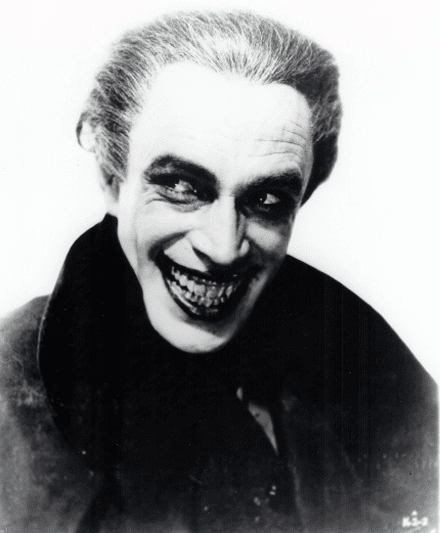 There's nothing funny about The Man Who Laughs. Paul Leni's film for Universal adapts Victor Hugo's novel of 1869 - set in England, 1690 - to tell the story of Gwynplaine, the innocent young son of an enemy to King James II, who is brutally disfigured by order of the monarch, his face permanently stricken into a hideous grin so that he may "laugh forever at his fool of a father", lately cast into the iron maiden. We pick up Gwynplaine's story in adulthood, where the outcast (Conrad Veidt) earns a living in a traveling fair run by the kindly mountebank Ursus (Cesare Gravina) and pines for his blind co-star Dea (Mary Philbin). The growing fame of "the man who laughs" soon reaches the court of Queen Anne, where the corrupt duchess Josiana (Olga Baclanova) pursues him romantically on a whim, encouraged by cruel court jester Barkilphedro (Brandon Hurst). The latter learns of Gwynplaine's true heritage and claims to land and title. Gwynplaine is hurried to the House of Lords to be ennobled so that he may marry Josiana and surrender his lineage, but he refuses the honour and escapes, fleeing England with the banished Ursus and his beloved Dea.


Producer Carl Laemmle followed the success of his Hunchback Of Notre Dame (1923) and Phantom Of The Opera (1925) with Lon Chaney by again trawling through the French literary canon in search of a sympathetic monster. This time Chaney was unavailable, so Laemmle exploited his connections with the German film industry to land Conrad Veidt, star of expressionist classics The Cabinet Of Dr Caligari (1920), The Hands Of Orlac (1924) and Waxworks (1924), as well as his director on that last film, Paul Leni. The latter has opportunities to impress in The Man Who Laughs and seizes them, notably incorporating a clever first-person sequence on a ferris wheel to convey the giddy sense of fun enjoyed by the revelers at Southwalk Fair. However, it's inevitably Veidt's extraordinary Gwynplaine that steals the show. The great actor manages to inspire our pity for this grotesque creation with little more than a nervous wrinkled brow, an impressive feat. His frantic efforts to keep his "smile" concealed at all times behind scarf or clamped hands is an especially touching and well observed detail. The character famously inspired Batman creator Bob Kane to conceive the Joker and it's not hard to see why: the above still is once seen, never forgotten. Elsewhere, Olga Baclanova is memorable bathing nude as the degenerate Josiana, a character whose motivations she would effectively reprise in Tod Browning's similarly creepy Freaks (1932). Mary Philbin, a protégé of Erich von Stroheim returning from Phantom, is again very moving and Hurst is deliciously malevolent as Barkilphedro.
Posted by Joe at 11:23