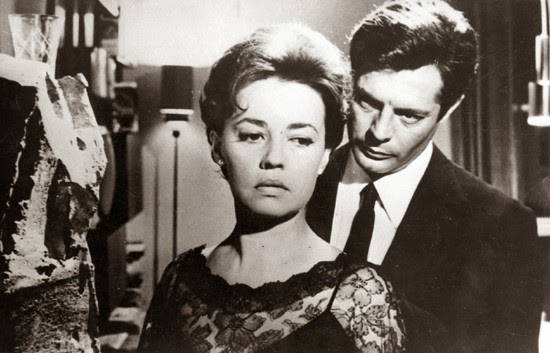 Sharing a theme with Rossellini's Journey To Italy (1953) and a milieu with Fellini's La Dolce Vita (1960), La Notte is a deceptively simple tale of the collapse of a loveless marriage from Michelangelo Antonioni. Marcello Mastroianni and Jeanne Moreau star as listless author Giovanni Pontano and his frustrated wife Lidia, the couple introduced visiting Giovanni's dying editor Tommaso (Bernhard Wicki) in hospital. They then attend a book launch, take an afternoon nap and wander the shabby backstreets of Milan respectively before reuniting to attend a tedious all-night garden party, each silently ruing the terminus they've reached and considering extramarital affairs: Giovanni with Valentina (Monica Vitti), the precocious daughter of an industrialist who aggressively pursues the writer with the offer of an executive post with his firm, Lidia with a stranger she meets in a rainstorm. 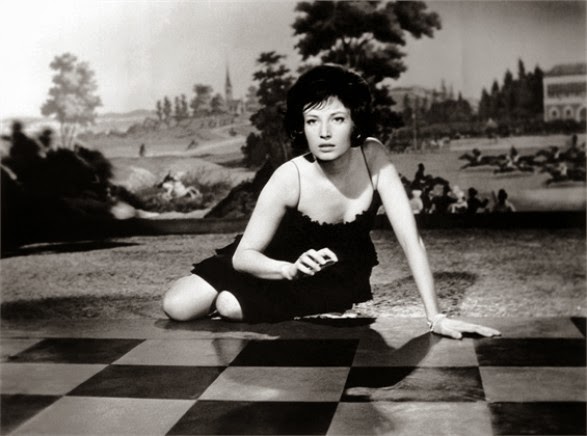 Giovanni, a probable influence on the similarly situated though older Jep Gambardella in last year's The Great Beauty ("I no longer have inspirations, only memories", he sighs), appears the more anxious of the two to maintain appearances, while Lidia seems more disposed to face up to the reality of their having drifted apart, whether irreconcilably or not. Quite what has caused the rift between them is never explicitly stated, although the readiness with which Giovanni allows himself to be enticed into the room of a nymphomaniac patient while visiting Tommaso suggests a penchant for philandering on his part that is later confirmed by his interest in Valentina, however half-hearted that project proves to be. Giovanni and Lidia are certainly bored by the upper middle class circles in which they move and both are embarrassed by the public rituals they encounter - a gangland fist fight, a gathering of children firing rockets into the sky, a weeping toddler and a striptease act all uncomfortably echoing aspects of their crumbling relationship in abstract ways. The run-down concrete wastelands Lidia passes through on her aimless wander, lit in blinding white sunshine and faint shadow, also provides a comment on the ruination of their love. It's no surprise to learn that this is one of Don Draper's favourite films in Mad Men (2007-), the demise of the advertising executive's marriage to Stepford wife Betty providing a close parallel with Antonioni's scenario. 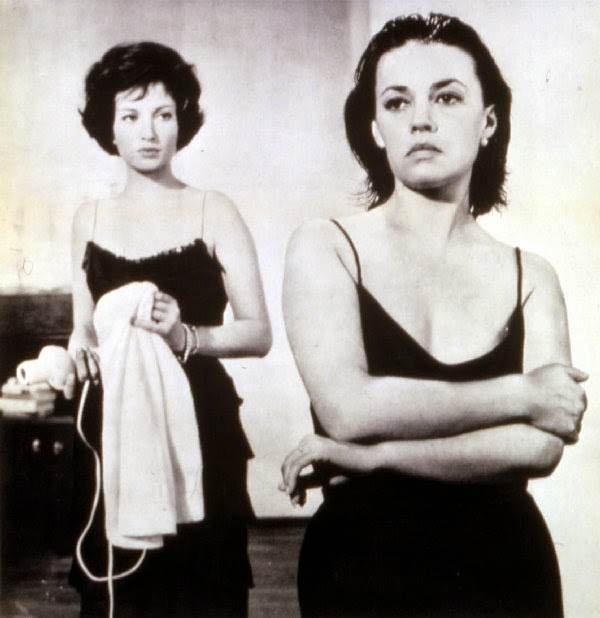 The great auteur largely leaves us to decipher the inner workings of his protagonists from their responses to the people and situations they involve themselves with and the layers of naturalistic detail with which he loads ever frame ensures that La Notte contains enough ambiguity and mystery to merit repeated viewings. "You've completely exhausted me, the two of you", cries Valentina as the party winds down, just prior to Giovanni and Lidia's apparent reconciliation. Quite. Incidentally, François Truffaut disliked Antonioni's use of Jeanne Moreau, soon to star in the Frenchman's own Jules Et Jim (1962), and complained that, "Antonioni had exploited the 'Bette Davis' side of Jeanne Moreau - the sullen face; she never laughed". Even at her most morose, Moreau is never far from lovely and gives a superbly nuanced performance, her horror of aging powerfully evoked.
Posted by Joe at 14:40