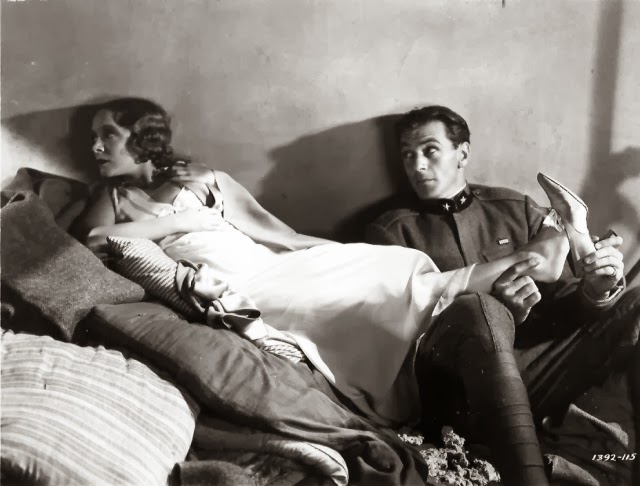 Gary Cooper and Helen Hayes, the First Lady of the American Theatre, star in this schmaltzy adaptation of Ernest Hemingway's famous 1929 novel about his experiences as a Red Cross ambulance driver in northern Italy during World War I. Directed by Frank Borzage for Paramount, the script by Oliver H.P. Garrett and Benjamin Glazer foregrounds the stormy romance between Coop's Lieutenant Frederic Henry and Hayes' British nurse Catherine Barkley at the expense of all other concerns, almost entirely sidestepping Hemingway's thoughts on the grim futility of war and the author's abiding pessimism about human nature. Sculpting a blockbuster love story out of this prestigious literary work was a more problematic proposition than it might at first have appeared: the narrative taking in pre-marital sex, desertion and death in childbirth, all themes deeply unpalatable to Will H. Hays and his censorship office, who, fortunately, only began enforcing their new Motion Picture Production Code two years later.


Borzage's movie was made on a budget of $900,000, about three times higher than the average studio output of the time, and is inventively shot despite the obvious limitations imposed upon it by a soundstage production. The director makes use of low flying bi-planes, panicking horses, hillside graveyards, driving rain and bilious black smoke to effectively convey the terror and confusion of battlefields under siege from bombing raids. The film's biggest flaw actually turns out to be the unfortunate but undeniably hilarious height difference between its leads: the 6'3 Cooper towering over his diminutive 5' co-star. The filmmakers, having obviously noticed this problem and fearing ridicule, sought to overcome it by rarely showing the lovers standing up together, preferring instead to present them seated or lying enraptured in each other's arms, which only half works. Despite this unintentionally comic note, Cooper and Hayes are well matched and A Farewell To Arms was well received by contemporary critics. Hemingway, however, was unsurprisingly among the naysayers, despite not having seen it. Invited to a private screening near his home in Piggott, Arkansas, Papa sent a telegram to the studio, declining their offer and advising executives: “Use your imagination as to where to put the print, but do not send it here.” Perhaps he was too busy counting the $80,000 he received when he sold them the rights.
Posted by Joe at 11:57