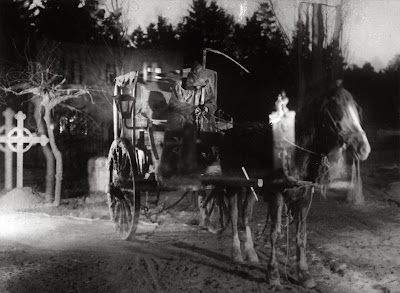 The great Swedish silent director Victor Sjöström is probably best remembered by modern audiences, if at all, for his acting performance as the ageing academic Isak Borg in Ingmar Bergman's beautiful road movie Wild Strawberries (1957). That film opens with a surreal dream sequence that provides Borg with a timely memento mori: his unconscious mind places him on an empty street in time to see a sinister horse-drawn hearse arrive and let slip its coffin into the road, only for the professor to investigate and encounter his own cadaver staring back at him. This famous scene is in part a tribute to The Phantom Carriage, Sjöström's inventive adaptation of Thy Soul Shall Bear Witness!, a 1912 novel by the Nobel prizewinning Swedish novelist Selma Lagerlöf.

In the earlier film, Sjöström both directs and stars as David Holm, a cruel, misanthropic drunk suffering from tuberculosis who dies during a brawl in a graveyard on the stroke of midnight one New Year's Eve and is thus required to drive death's chariot for a full calendar year, harvesting the souls of the dead and delivering them to the hereafter as penance for a life ill-lived. Holm, however, is reluctant to serve his time behind the reins, whereupon the current driver, Georges (Tore Svennberg), a drinker who died exactly one year earlier, invites him to confront his past and redeem himself in the eyes of those he has wronged. These include Holm's estranged wife (Hilda Borgström) and children, his late brother (Einar Axelsson) and a dying Salvation Army sister (Astrid Holm) who tried to save him from himself before being struck down with consumption herself. 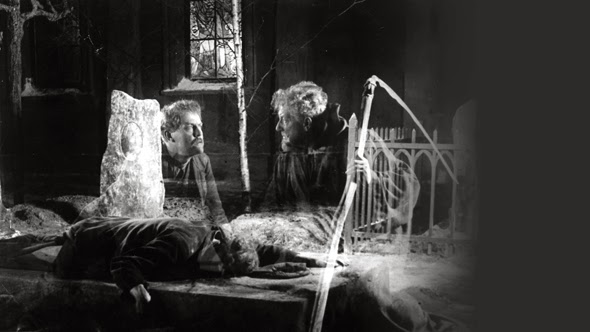 Lagerlöf's morality tale may owe a debt to Dickens's hardy seasonal ghost story A Christmas Carol (1843) and share her precursor's concern for the poor and downtrodden, but its true theme proves to be the toxic consequences of alcoholism for both society and the individual. Something of a temperance lecture, The Phantom Carriage presents a startling case study of man busily tearing himself and the lives of those around him apart under the influence of the devil's brew. "David Holm is as possessed by drink as a vampire is by blood", critic Paul Mayersberg has said. The motivation behind the character's love for the bottle and bitter hatred of his fellow man is never explicitly stated, but his actions are shocking enough. Sjöström's Holm is not averse to coughing in the faces of strangers or even his own children in the hope that they too catch his disease, behaving like a destructive agent of pestilence, a plague-bearer determined to bring the whole world crashing down with him. At one point he smashes his way through a locked bathroom door with an axe in order to attack his wife in a scene that clearly inspired Stanley Kubrick's The Shining (1980), another film that dealt with a drinker's descent into psychosis. Holm's redemption saves this Gothic polemic from outright horror, but it's a close run thing. 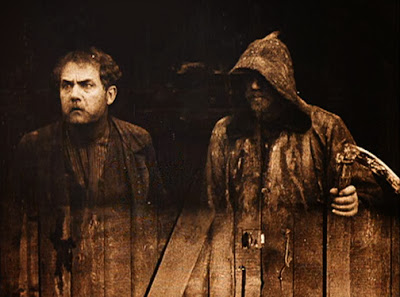 Sjöström's film is also astonishing for its experimentation with double exposure, a trick for conjuring transparent spectres as old as photography itself brilliantly pulled off by cinematographer Julius Jaenzon and lab technician Eugén Hellman. This ingenious effect is used extensively throughout, capturing whole conversations, showing the Grim Reaper going about his business and even driving his carriage down to the seabed to retrieve the soul of a drowned sailor lying beneath the waves.
Posted by Joe at 08:39