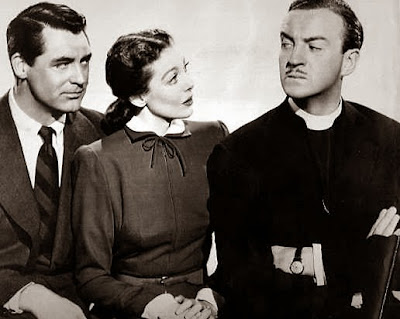 Happy Christmas! Here's a nicely festive feature for the holiday season in which Cary Grant stars as an angel sent to earth to aid Henry Brougham (David Niven), a newly elected bishop charged with raising the funds to build a new cathedral. Brougham is under pressure from his snooty sponsors and in danger of losing sight of what's really important in his life.

Comparisons with the previous year's It's A Wonderful Life* are inevitable, but Henry Koster's film proves to be a much lighter confection, with Grant's impish, pleasingly ambiguous Dudley setting out to woo the neglected Julia Brougham (Loretta Young) in order to spark her husband's jealousy and thereby lift him out of his personal and professional rut. Although Brougham has become obsessed with the construction of a monumental white elephant, he is no Fitzcarraldo or Colonel Nicholson and his crisis of faith is only lightly touched upon. Really, The Bishop's Wife is a safely chaste romance, with precisely no chance of Grant and Young's rapport ever boiling over into a torrid affair and Brougham only needing a gentle nudge to lure him out of his depression. The screenplay by Leonardo Bercovici and Robert E. Sherwood (later spruced up by Billy Wilder and Charles Brackett) also struck me as something of a conservative cautionary fable, warning against unrealistic ambition and overreaching beyond your basic level of competence: Henry was obviously a much happier, more fulfilled and useful person conducting the boy's choir in his previous incarnation as pastor of St. Timothy's and is not at all suited to the business of buttering up socialites required of him as bishop. 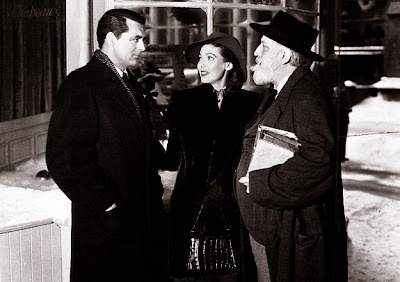 Cinematographer Gregg Toland does a superb job of capturing the snowy grandeur of the American winter, echoing his work on Orson Welles's Citizen Kane (1941), while Grant and Young make for a charming pair, both proving themselves to be excellent ice skaters. Niven does well as the crestfallen cleric and displays enormous dignity in the scene in which he realises that Dudley has magically glued the seat of his trousers to a parlour chair in front of the fierce Mrs Hamilton (Gladys Cooper). Her melting when Grant plays a harp melody composed by her long-dead lover is another exquisitely played interlude, while elsewhere there's robust support from Elsa Lanchester as a nervous maid and from Monty Woolley as a sherry-swilling professor perennially putting off writing his magnum opus on the fall of Ancient Rome. However, one question remains: how the hell does Sylvester the cab driver (James Gleason) pay the rent if he never accepts fares?

*In addition to both carrying a divine intervention plot, both films feature child actor Bobby Anderson, the young George Bailey in the earlier film and here billed as the "Attack Captain" in the snow fight scene. Clearly something of a specialist.
Posted by Joe at 15:32