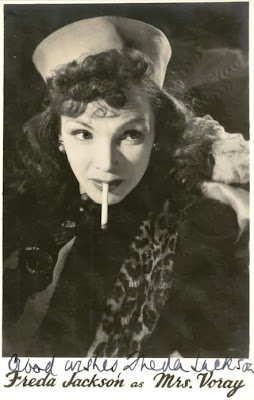 Many thanks to my friends Mike and Celia for introducing me to this rarely seen but utterly superb drama from British National Films about the mistreatment and neglect of child evacuees during WWII. An adaptation of Joan Temple's play by producer Ivan Foxwell and the legendary Welsh poet Dylan Thomas, No Room At The Inn sees Freda Jackson reprise her stage role as the vicious Mrs Voray, an unscrupulous widow in an unnamed northern industrial town who offers a temporary foster home to children from the bomb-blasted cities in order to pilfer their allowances and bankroll her pub crawls with the proceeds.

Jackson is absolutely outstanding, attractive and humorous when it comes to the (numerous) men in her life, but a fearsome witch to the children she stockpiles and imprisons in her outdoor coal shed. Vain, frankly promiscuous, drink-sodden and deeply cunning, Mrs Voray deserves to be recognised as one of the great screen villains, while Joy Shelton provides a strong and necessary counterpoint as Judith Drave, a concerned teacher campaigning on the children's behalf. Mrs Draves' encounters with hypocritical middle class curtain-twitchers and an ineffectual clergyman are all too plausible and a scene in which she has Mrs Voray hauled before a meeting of bickering town councillors, only for her case to fall down for want of evidence and her enemy's "influence" with a lecherous butcher among their number, is particularly devastating. The child actors are all excellent too, with Ann Stephens and Joan Dowling (below left, with Hermione Baddeley) leading by example. 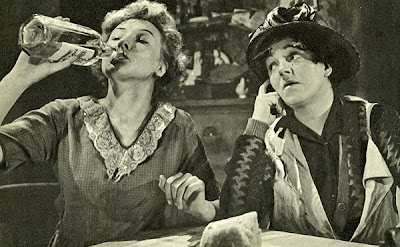 No Room At The Inn failed to find favour during its original theatrical run, which, with the benefit of hindsight, is perhaps unsurprising. In the aftermath of the jubilation and euphoria surrounding V.E. Day, the Great British public was understandably determined to put the horrific experiences and deprivation of the war years behind it and to face the future with a renewed sense of optimism. A screen entertainment earnestly seeking to revisit and expose the problem of child abuse on the home front, an inconvenient truth if ever there was one, was arguably doomed to fail at a time when cinema audiences wanted spectacle, romance and escapism, a little light relief from the grim, ration book austerity they encountered daily. Nevertheless, No Room At The Inn had a powerful impact on many who did see it at the time and has continued to resonate whenever it's been shown over the proceeding decades, typically with adults who themselves endured similarly unhappy experiences to those depicted in Daniel Birt's film, a far cry from the jolly adventures evacuees enjoyed in the likes of The Lion, The Witch & The Wardrobe (1950). Never shown on television because of its distressing subject matter and long unavailable in any format, No Room At The Inn has fortunately resurfaced on YouTube in recent times and can be seen in full here. Needless to say, it's highly recommended: an entertaining and haunting drama that dared to discuss a national scandal that's still rarely addressed outside of university history faculties to this day.
Posted by Joe at 12:06