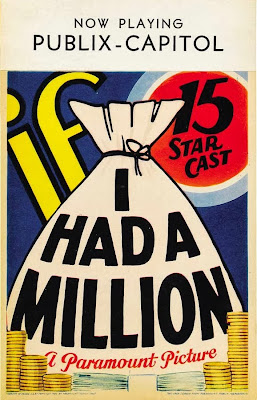 This excellent Depression-era  fantasy from Paramount revolves around dying industrialist John Glidden (Richard Bennett), who decides against leaving his fortune to grasping relatives and hangers-on and instead elects to hand out million dollar cheques to strangers chosen at random from the phone book. This premise provides the pretext for an anthology of eight different stories recounting how each recipient dealt with their unexpected handout. Extremely varied in tone, with segments directed by the likes of Ernst Lubitsch, Norman Z. McLeod, Norman Taurog and William A. Seiter and written by a mob of studio hacks gathered together by Joseph L. Mankiewicz, If I Had A Million proves to be a fascinating little chocolate box of goodies.


The opening story, in which Charlie Ruggles is freed from his unhappy job in a china shop, only to return dressed in an immaculate suit and accompanied by a new pet rabbit in order to trash the place, sets the mood expertly. The next, in which a tavern whore (Wynne Gibson) treats herself to a luxury hotel suite, brings a touch of Viennese melancholy to proceedings, which is capitalised upon in the following caper. Warner Brothers gangster icon George Raft here plays a career criminal wanted for forgery who cannot enter a bank to cash in his bounty without risking arrest, ending up a hysterical derelict. Darker still is the tale of a death row convict, brilliantly played by Gene Raymond, who can at last afford a decent lawyer to argue his case, but is dragged to the chair before he can reach a payphone.

Fortunately, Alison Skipworth and W.C. Fields lighten the load in 'Road Hogs' as a pair of retired circus turns running a tea room who lavish all their savings on a brand new automobile, only to suffer a bad smash on its maiden voyage. Broken but not beaten, the pair use Glidden's cash to buy a whole convoy of new vehicles and stunt drivers, patrolling the highway in formation looking for bad drivers to deliberately run into for revenge (an amazingly unlikely precursor to J.G. Ballard's 1973 novel Crash). Equally surprising is the brief use of Charles Laughton in Lubitsch's entry as a put-upon clerk, who simply rises from his desk impassively upon receiving notification of his windfall, ambles up the stairs to announce his resignation before knocking on the company president's door to blow a violent and triumphant raspberry, all with hardly a word said. Gary Cooper, Jack Oakie and Roscoe Karns follow this as three marines competing to take a pretty waitress out on a date to a carnival, dismissing the cheque's arrival as an April Fool and signing it over to a cafe owner to pay off their burger debts, only to see the girl walk off with the latter, newly minted. Ending on a truly touching note, May Robson stars in 'Grandma' as a bored, lonely and frustrated old dear who uses the money to improve the lives of her friends at a retirement home, ordering the institution's patronising staff to take their place in rocking chairs while the gals bake biscuits and dance, an investment that particularly gladdens old Glidden's heart.
Posted by Joe at 11:41