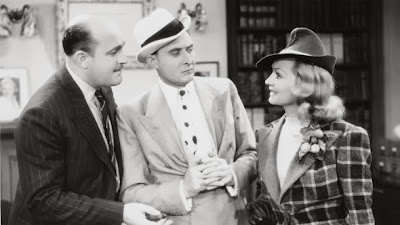 This rather unsuccessful British caper from the early days of the war was the 13th and penultimate attempt to make a movie star out of legendary British music hall comic Max Miller, but the first to have the bright idea of casting him as a comedian. As such, Hoots Mon! contains the only surviving visual record of the Cheeky Chappie's stage act (albeit slightly watered down for a family audience) so remains a valuable relic of a lost era, even if the film itself is more than a little slight. A specialist in rapid-fire wordplay and suggestive storytelling, famed for his ability to manipulate an audience, Max is quite something in his floral silk suit, fat tie and golf socks and his craft is there for all to see.


Hoots Mon!, made by Warner Brothers' UK subsidiary at their studios in Teddington, appears to have been modeled on the zany American screwball pictures of the thirties, which makes a good deal of sense. Perhaps surprisingly, Miller's tongue-twisting repartee and scenes racing around a hospital causing chaos in a nightshirt actually call to mind the Marx Brothers and Groucho in particular. Max stars as Harry Hawkins, "England's funniest comedian", who takes exception to sharing a bill with "the Bluebelle of Scotland", Jenny MacTavish (Florence Desmond), after the lassie upstages him at the Empire Tottenham with a spot-on impersonation. Arguing backstage, MacTavish challenges Hawkins to take his act north of the border, where she insists he'll die a death. He accepts and duly does. Later Harry is duped into performing for a group of rabid, thistle-munching Scottish Nationalists, a gig that ends with him waking up in a children's ward with a black eye, before ultimately being reconciled with his rival. Desmond makes for a good foil, also impersonating Bette Davis among others, while Miller works tirelessly to win us over, but the finished feature from Max's regular director Roy William Neill lacks structure, character and plot, I'm afraid to say.
Posted by Joe at 09:37