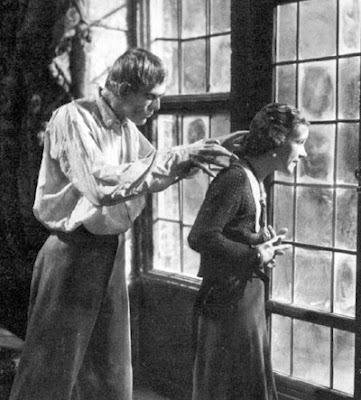 Boris Karloff returned to England for the first time since setting sail for Canada in 1909 in order to make this really rather awful horror for Gaumont-British, overseen by Michael Balcon and directed by T. Hayes Hunter. Long thought lost, The Ghoul was the source of no little disappointment when a copy was finally unearthed by William K. Everson in Communist Czechoslovakia in 1969. An adaption of Frank King's 1928 novel of the same name (also a popular stage play of its day by the author and Leonard J. Hines), Karloff stars as Professor Henry Morlant, a dying Egyptologist who believes the ancient god Anubis will grant him immortality in exchange for the return of a priceless jewel once excavated from a pharaoh's tomb. Morlant swiftly shuffles off this mortal coil and is buried according to Egyptian custom with the gem bound in his fist, only for it to be pilfered by an untrustworthy acquaintance soon after. Morlant rises from the grave to retrieve his property, haunting his in-laws, loyal Calvinist man servant (Ernest Thesiger), villainous lawyer (Cedric Hardwicke) and a pair of nefarious Arabs, all of whom have joined in the treasure hunt around the dead man's dusty manor. 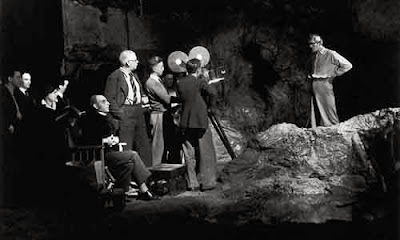 Karloff was only available for the picture having hit a deadlock in contract talks with Universal, who had wanted him to take a pay cut for their forthcoming adaptation of H.G. Wells's The Invisible Man (1897). Presumably some wily executive thought the studio could get away with reducing his salary because audiences wouldn't actually be seeing Karloff on screen. Instead, he was loaned out to Gaumont and leapt at the chance to return home, as biographer Stephen Jacobs recounts in a post over at The Spooky Isles, which is well worth reading. The resulting film was an obvious cash-in on the success of its star's two previous hits, James Whales' The Old Dark House (1932) and The Mummy (1932), directed by Karl Freund. The Ghoul has a great many faults and is only redeemed by its impressive cast and exquisitely gloomy, candle-lit photography from German expressionist maestro Günther Krampf, who had served as cameraman on the silent classics Nosferatu (1922) and Pandora's Box (1928). Karloff is actually badly misused by the screenwriters, Angus MacPhail among them: killed off in the opening scene, he only returns late on and is then inexplicably unable to talk, staggering around and groaning like Frankenstein's monster or the bandaged Imhotep without cause. Meanwhile, Morlant's relatives, a pair of bickering young cousins played by Dorothy Hyson and Anthony Bushell, are wrongly foregrounded as the focal point of interest, with the hot-headed Bushell in particular guilty of some hilariously stagy and abrupt line readings. Hyson is meanwhile asked to faint twice and her cowardly spinster friend Kaney (Kathleen Harrison), the film's utterly unnecessary but endearing comic relief, also passes out through shock, none of which helps advance the plot one iota. Hardwicke and Thesiger are utterly wasted wandering around in the dark while all this squabbling is going on and very little is resolved at the conclusion. 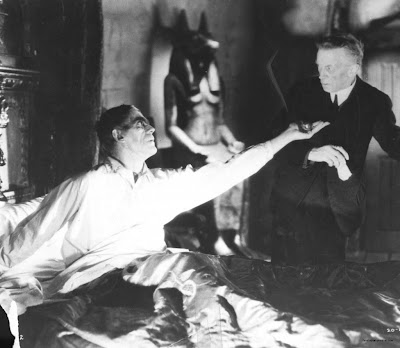 The film did at least have one admirer. Future knight of the realm Ralph Richardson, who made his screen debut here as a suspect parson, fondly remembered The Ghoul in conversation with Roy Plomley on the BBC's Desert Island Discs in 1979, claiming that he'd managed to snag the best part and recalling laughing at Karloff for having to spend so long in make-up while all he had to do was slap on a dog collar.
Posted by Joe at 11:58