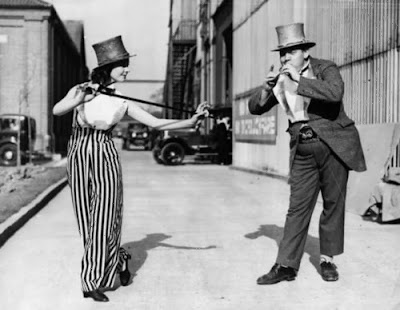 Charles Laughton's London street poet Charlie Staggers is chagrined when an impoverished young waif known only as Liberty (Vivien Leigh) steals his takings one afternoon in Covent Garden and angrily pursues her home to the derelict townhouse she's squatting in. There he finds Liberty dancing alone in the moonlight (a standout scene) and takes pity on her, eventually adopting her as his protégé. Forming a performance troupe with his strange friends Gentry and Constantine (played by theatre director Tyrone Guthrie and harmonica virtuoso Larry Adler respectively), Charlie and Liberty prove popular with the public, while the latter catches the eye of influential West End entrepreneur Harley Prentiss (Rex Harrison), who promptly whisks her away and launches her career on the stage. Poor Charlie, who had hoped to marry his beloved "Libby", instead falls on hard times and turns to drink, all but forgotten by the orphan girl made good.

It has to be said that the young Leigh's Cockney accent comes and goes a bit in this reworking of a script by Clemence Dane for Laughton's Mayflower Productions, but she has energy to burn and the camera absolutely adores her. Liberty's ruthless streak and habit of using people to get ahead could perhaps be seen to echo aspects of the troubled actress's own personality, although the role had originally been intended for her co-star's wife Elsa Lanchester, with Leigh chosen instead due to her contemporary success on stage in Ashley Dukes' play The Mask Of Virtue. Laughton meanwhile, an uncredited co-writer and producer, found a fine vehicle for his peculiar talents and makes Charlie's plight very affecting (although apparently he didn't get on at all well with his leading lady on set). Irish-American Tim Lewis keeps things ticking along nicely, with help from future director Robert Hamer on editing duties, and the result is a touching if predictable melodrama, essentially A Star Is Born with theatre queue buskers. The Americans didn't take to it when it was retitled Sidewalks Of London, finding the accents impenetrable and the staging of the musical numbers lacklustre by their own high standards, but I must say I found plenty to enjoy.
Posted by Joe at 19:07