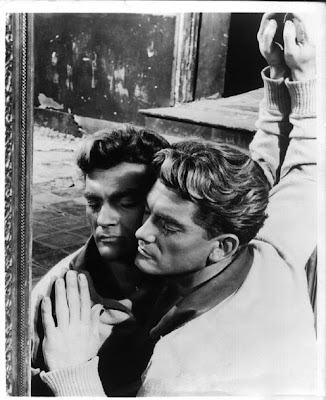 Jean Cocteau was long preoccupied by the myth of Orpheus, the ancient Greek minstrel who descended to the underworld to rescue his beloved Eurydice before meeting a tragic end, and returned to the tale several times in his pursuit of cinéma fantastique. This version relocates Orpheus to contemporary France and casts Jean Marais, Cocteau's Beast and muse, as an arrogant, lyreless poet who encounters Death in the guise of a mysterious princess (María Casares) at a St. Germain café when she arrives to collect the soul of his drunken rival Cégeste (Edouard Dermithe), who has been abruptly run down by a pair of mysterious motorcycle policemen. Orpheus returns to his wife Eurydice by hitching a lift with the princess's emissary Heurtebise (François Périer) but finds her company stifling compared to that of the mysterious femme fatale and becomes obsessed with cryptic poetry being transmitted over the radio. Heurtebise meanwhile falls for Eurydice having taken up residence in Orpheus's home and facilitates the latter's entry into the afterlife via a rippling mirror once she has been killed by the motorcyclists. There Orpheus faces a tribunal and wins the right to return to the land of the living with his bride, only to realise that he has fallen in love with the princess. 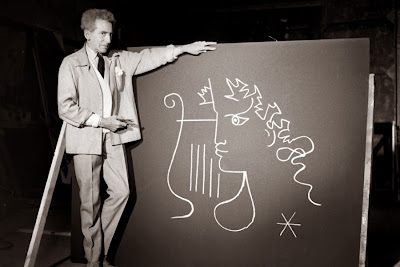 There is much to recommend Cocteau's atmospheric, dreamlike and idiosyncratic Orphée, but I have to admit I found his embellishment and complication of the myth unwelcome and counter-productive. John Keats's confession from 'Ode On A Nightingale', "I have been half in love with easeful Death", becomes quite literally the case here as a means of emphasising the creative artist's necessary dalliance with immortality and otherworldly matters, but where does that leave poor Eurydice? A beauty once worth dying for becomes the embodiment of mundane, bourgeois domesticity and a trap from which Orpheus should strive to free himself. Meanwhile, the operatic tragedy of his breaking his promise by looking back at her, when he has been expressly forbidden to do so, is utterly undone by the director's decision to play it for farce. The poet finally catching her gaze in a car's rear-view mirror feels anticlimactic when it should deliver exquisite agony.

Cocteau goes out of his way to introduce symbolic touches that nod to the tense postwar environment, notably the bomb-damaged ruins of the underworld, but the fascist-uniformed angel of death bikers are ludicrous, it has to be said. It has been suggested that the director perhaps felt the need to account for his failure to support the French Resistance - despite personally having suffered violence at the hands of homophobic right-wing thugs - and is addressing the matter through Eurydice's hearing in his own peculiar way. Despite Orphée's not wholly successful eccentricities, there's plenty of luxuriant, noirish cinematography to enjoy from Nicolas Hayer, some pleasing trick photography and bold performances from Marais, Casares and Périer, not to mention an appearance by chanteuse Juliette Gréco as Aglaonice, leader of the Bacchantes. A highly original stylist, it's fair and just that this créateur complet and friend to Picasso, Stravinsky and Erik Satie should have been hailed rather than trashed by the likes of Truffaut and Godard who followed in his wake.
Posted by Joe at 22:01