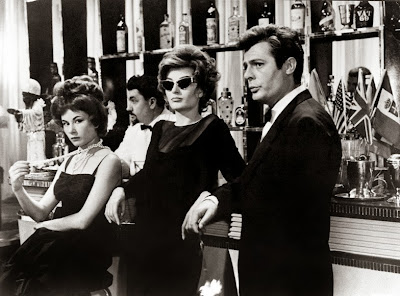 Federico Fellini's most iconic and celebrated film remains as enviably stylish as ever. La Dolce Vita was always wildly ahead of its time, from its episodic, freewheelin' structure to its bold breakaway from drab post-war neorealism, inviting us to revel in the glamour and spectacle of the irresponsible Roman rich at play rather than mourn for the nobly impoverished. What is less often said about the film is just how savage and prescient it is as a critique of rabid modern media culture. Fellini's protagonist Marcello Rubini (Marcello Mastroianni) is deeply conflicted about his career as a hack reporter, enjoying the interesting women he encounters (Anouk Aimée, Anita Ekberg, Nico) and the bacchanalian parties he attends in pursuit of a story for his tabloid paymasters but loathing the sleaze and exploitation demanded of him and longing for a more respectable, meaningful way of life. This is surely a universal dilemma for any self-respecting member of the Fourth Estate that endures to this day. On the one hand, Marcello relishes his helicopter ride as the statue of Christ the Labourer is airlifted out of the Eternal City in the opening scene and can hardly believe his luck when splashing about in the Trevi Fountain with the unbelievable Ekberg. On the other, Marcello is exasperated when he is expected to bury his cynicism to report on a "miracle" sighting of the Madonna in the provinces and repulsed when a colleague asks him to use his credentials to gain access to a crime scene after his erudite friend Steiner (Alain Cuny) has murdered his own children with a shotgun before committing suicide. The moral compromises that are all in a day's work for the yellow press have rarely been more explicitly or bitingly addressed and Fellini and his co-writers Ennio Flaiano and Tulio Pinelli deserve every credit. Their greatest legacy in this regard, however, was the decision to name Marcello's ambulance-chasing photographer acquaintance Paparazzo (Walter Santesso), a choice that gave the world a term for these previously nameless buzzards of privacy invasion. 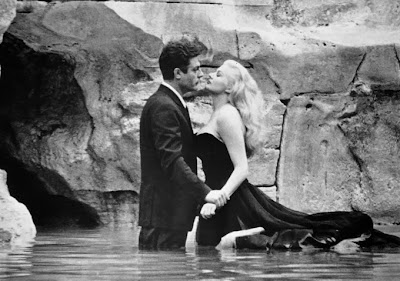 Woody Allen had a crack at an updated version of La Dolce Vita when he made Celebrity in 1998 but perhaps the true heir to Fellini is Paolo Sorrentino, whose recent masterpiece The Great Beauty (2013) was closely modelled on the film. The brilliant Toni Servillo's columnist Jep Gambardella stands in for Mastroianni to guide us through the decadent nightspots inhabited by the wealthy elite that today comprise the privileged 1% of Berlusconi's Italy, a land otherwise brought to its knees by political and economic turmoil. Jep, elegant, quietly amused but something of a disappointed romantic, leads us from the rooftop raves and Botox parties of these fabulous creatures to the Polish strip clubs where they crash out and see in the dawn, oblivious to the hardship and ruin all around them. "We're all on the brink of despair, all we can do is look each other in the face, keep each other company, joke a little... Don't you agree?" Jep concludes. Half a century on, little has changed, Sorrentino tells us.
Posted by Joe at 15:20