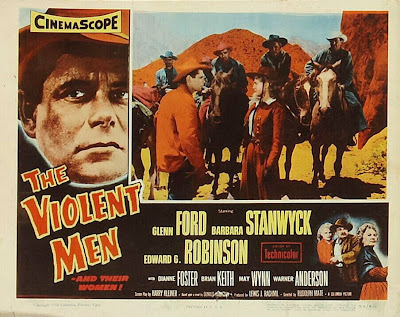 Edward G. Robinson was reunited with Glenn Ford and Barbara Stanwyck, his co-stars in Destroyer (1943) and Double Indemnity (1944) respectively, for this workmanlike but enjoyable psychological Western from Rudolph Maté for Columbia. Taken from Donald Hamilton's 1954 pulp novel Smoky Valley, The Violent Men treads similar thematic terrain to Shane (1953) in presenting an upstanding hero, John Parrish (Ford), reluctant to join a range war that appears increasingly inevitable because of the aggressive behaviour of a posse of agitators bullying local farmers and nesters into selling their land to ambitious ranch tycoon Lew Wilkison (Robinson). The latter is crippled having been shot during a swathe of similar skirmishes a decade ago and his manipulative wife Martha (Stanwyck) has long since embarked on an affair with his virile brother Cole (Brian Keith), a melodramatic scenario that is probably the film's real point of interest. Stanwyck is firmly in Lady Macbeth mode here, more Phyllis Dietrichson than Annie Oakley despite the setting, and her love for the undeserving Cole, a meat head if ever there was one, drives her to increasingly desperate measures. Her daughter Judith (Dianne Foster), the Wilkison family's voice of reason, is disgusted by Martha and her comeuppance at the hands of a foe she's entirely underestimated is satisfyingly abrupt. 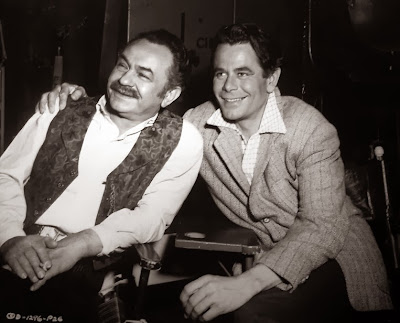 Attractively shot in CinemaScope, making good use of the heather groves and snow-topped peaks of its California and Arizona shooting locations, Maté's The Violent Men is an unsurprising but solid piece of filmmaking, finding a good use for three stars best known for noir and slightly past their sell-by dates. Hollywood used to turn out this sort of thing every other week like it was nothing. Nowadays, a man's lucky if he encounters one or two films of this calibre a year.
Posted by Joe at 19:49