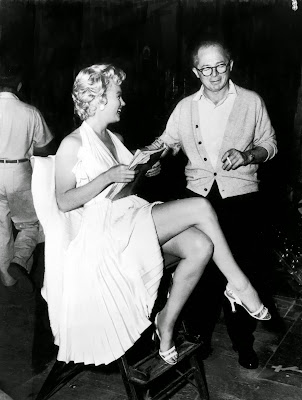 Marilyn Monroe shares a joke with Billy Wilder on the set of The Seven Year Itch before shooting the famous scene in which she stands astride a New York subway grate as a train passes below, causing her white dress to billow in the breeze as Tom Ewell stands back and admires the view. It's Ewell though who really carries the film, reprising the role of Richard Sherman from the source play's original Broadway run, and appearing and soliloquising in almost every scene as the neutered husband left home alone in the sweltering heat of the summer while his wife and son head up to Maine on vacation. Unlike Mad Men's Pete Campbell, who ran into trouble with a German au pair in similar circumstances, Sherman vows to forego all opportunities for infidelity until he encounters Monroe's leggy dream girl renting the vacant flat above and proceeds to tie himself in knots with desire and guilt. 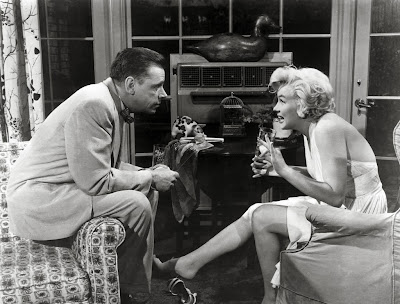 Ewell and Monroe bond over potato chips, champagne and Rachmaninoff and make for a delightful double act in a comedy of sexual frustration that was controversial in its day and still feels startlingly frank. A recurring joke about two male "interior decorators" living upstairs proves to be just one of many extraordinarily daring details in George Axelrod's script, which brilliantly casts Ewell's domesticated publisher as a sexual Hamlet, tormented by his lust for Monroe but unable to decide whether or not to go through with an affair. Austrian wit Wilder finds just the right cartoonish tone for this bawdy premise and deftly interrupts Sherman's agonised hand-wringing with fantasy interludes spoofing such contemporary reference points as From Here To Eternity (1953) and Liberace. The result is funny and warm with plenty to say about society's ingrained hypocrisies towards sexual manners and mores, even if it does ultimately serve up a predictably conservative moral. The film's standout scene comes early on when Ewell visits a voguish vegetarian restaurant (which reminded me of this vintage Sid Caesar sketch) and finds himself harangued by a waitress, a militant naturist, on the subject of world peace through nudity, a notion worthy of Peter Cook's E.L. Wisty.
Posted by Joe at 22:31