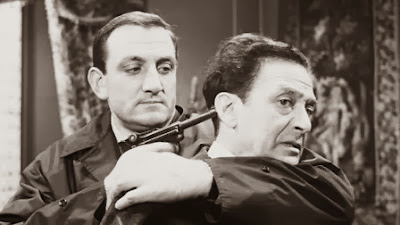 Fugitive French crook Abel Davos (Lino Ventura) flees Italy with his partner Raymond Naldi (Stan Krol) and young family, getting as far as Nice before both Naldi and Abel's wife Thérèse (Simone France) are brutally gunned down by the gendarmes. With no time to grieve, Davos conceals his sons in a seaside boarding house and seeks help from crime boss Frangier (Claude Cerval), who dispatches hired hood Eric Stark (Jean-Paul Belmondo) to rescue the outlaw and his progeny in an ambulance and deliver them to Paris. En route, Davos and Stark become fast friends but the former soon learns that his old employers no longer have his best interests at heart, a realisation with bloody consequences for all concerned.

"I believed in the friendship of Abel Davos and Stark absolutely", said Jean-Pierre Melville after seeing Classe Tous Risques, a film that would greatly influence his own gangster-inflected oeuvre. "The two men's behaviour makes explicit their feelings, without either of them having to speak of their friendship. On the other hand, I was not able to believe in the friendship of [François Truffaut's] Jules and Jim, even though they speak of it often." Ouch. 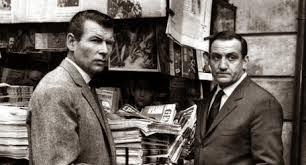 Melville was pointedly speaking out in defence of Claude Sautet's feature debut after it had been sadly underrated upon its initial release, dismissed as old fashioned by a film culture caught up in the giddy rush of excitement surrounding la Nouvelle Vague. Seeing it today in a spanking new restoration at the BFI, it's hard to resist cheering Melville's remarks. As tense, brooding and fatalistic a thriller as you could wish to see, Classe Tous Risques benefits hugely from Sautet's tight direction - his curious camera seemingly lurking in every corner, peering over the shoulders of his actors at all times to ensure we don't miss so much as a bead of sweat. Sautet had previous experience as an assistant director and troubleshooting script doctor so clearly knew a thing or two about the mechanics of storytelling. There's a real fondness between the leads, as Melville indicates, which makes the climax all the more affecting. Belmondo is, of course, a handsome dog and makes up one half of a very pretty couple with love interest Sandra Milo (below), but it's ex-wrestler Ventura's show. Recently described by Sight & Sound editor Nick James as promising "the simmering danger of a wounded gorilla", Ventura's tired eyes, wrinkled brow and flat nose are the scars of a brutal existence, of professional violence and punctured illusions. He was cast for his imposing physique and it's not hard to understand why such an authentic tough guy became a star. 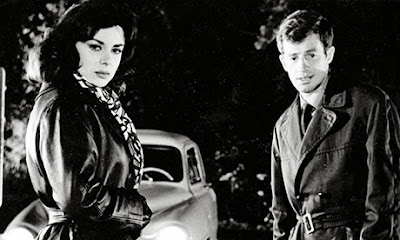 The story was adapted from a book by Corsican ex-con José Giovanni, who also wrote the gritty novels on which Jacques Becker's Le Trou (1960) and Melville's Le Deuxième Souffle (1966) were based. One of Giovanni's ex-cellmates had been a certain Abel "The Mammoth" Danos, a hulking mobster and French gestapo during the Occupation, whom the aspiring author befriended by offering chocolate and contraband stamps in exchange for his life story.
Posted by Joe at 22:34