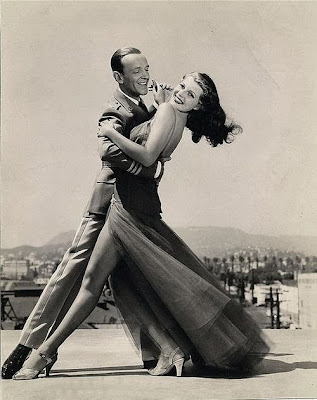 Fred Astaire left behind RKO, Ginger Rogers and his familiar Wodehousian wonderland (well, sort of) to sign up with Uncle Sam in this unlikely patriotic entertainment for wartime, which is best remembered for offering the world Rita Hayworth in her first starring role. Hayworth had grown up as a member of The Cansinos, a family Latin American dance ensemble, and her obvious experience and ease make her a fine partner for Astaire, a notorious perfectionist.

The picture itself still involves all the usual romantic entanglements, light farce and comic misunderstandings we expect from an Astaire outing, as well as some fine songs by Cole Porter, but the army only really serves as topical set dressing whose authoritarian rules and discipline Astaire cheerily makes fun of and ignores, only too happy to end up in the guardhouse for stealing a captain's jacket or accidentally pulling down a tent. The question of our man being dispatched to Europe or the Pacific is never once raised, of course. You'll Never Get Rich does, however, boast the astonishing sight of its stars dressed as a bride and groom dancing on top of a giant white tank for the amusement of the troops, which is worth the price of admission alone and the sort of oddity these wartime screwballs* tend to turn up. Its musical numbers are generally better integrated into the script than in some cases, typically being tied into rehearsal scenes, of which the following tap piece is unquestionably the neatest example.


Having said that, Fred freestyling solo out of his bunk (while smoking!) along to this mournful lament from African-American fiddle band the Four Tones is also quite something.


Ultimately, You'll Never Get Rich doesn't quite square up to the best of the Astaire-Rogers series and is rather flatly directed by Sidney Lanfield, but it's a lot of fun nonetheless. Hayworth is lovely and clearly enjoying herself and there's some amusing  character playing from Robert Benchley as a philandering theatre owner routinely outwitted by his agreeably jaded wife (Frieda Inescort) and from Donald MacBride as a terminally angry drill sergeant frustrated with Astaire's hyperactive feet during manoeuvres. Comic Cliff Nazarro also makes an impression as a fellow draftee with a curiously incomprehensible manner of speech.