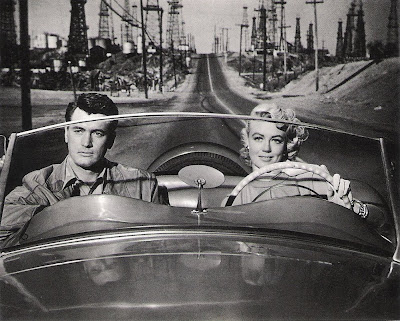 After a year of wedded bliss, Kyle learns that he might be sterile and resumes tearing himself apart with bourbon and vermouth, while the prolific Marylee seduces gas station attendants, pines after Mitch and dances like Salome in a rose negligee as her sorrowful father lies dying at the foot of the stairs. Mitch soon becomes so sick of this claustrophobic psychodrama, which would be enough to send Tennessee Williams outside gasping for air, that he considers taking a job in Iran (!) to escape it all, only for matters to come to a head when Lucy announces that she is pregnant, prompting Kyle to go on one final wild bender, convinced the child isn't his and plotting revenge against the imagined adulterer. 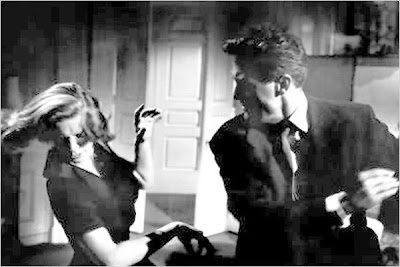 As is often the case with Sirk, the standalone plot of Written On The Wind (taken from a gossipy novel based on true events by Robert Wilder) may sound overblown but it's the surefootedness of the director's judgements, the superb ensemble acting and cinematographer Russell Metty's exquisite Technicolor palette that carry the day.

The latter in particular outdoes himself here, revelling in the exaggeration and artifice of it all. Metty's work is always striking but in Written On The Wind he hardly lets a single scene pass without catching some astonishing splash of colour, be it a birch branch hung with rusty autumn leaves, a mint green bar top, Hudson's clay suit or the electric pink walls of a Miami hotel corridor. Automobiles particularly lend themselves to this approach, with Kyle Hadley introduced drunk and roaring around town in a yellow Allard convertible (which reminded me of Leonardo Di Caprio's monstrous ride in Baz Luhrmann's recent Great Gatsby). Elsewhere a taxi cab basks in blue moonlight and Malone is just too outrageous to be true sporting pastel pink behind the wheel of a freshly polished cherry red Woodill Wildfire parked against a hazy evening.

The late Roger Ebert considered Sirk a subtler filmmaker than Ingmar Bergman and that really may not be such a ludicrous notion after all.
Posted by Joe at 14:41