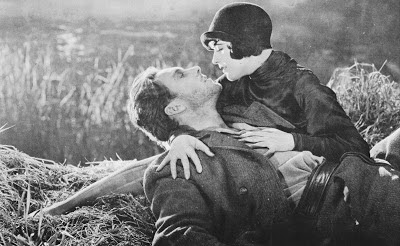 F.W. Murnau's simple tale of a farmer (George O'Brien) who plots to murder his young wife (Janet Gaynor) under the influence of a vampish city girl (Margaret Livingston) holidaying in the countryside is perhaps the crowning glory of the American silent cinema outside of Chaplin and Keaton. The great German expressionist auteur behind Nosferatu (1922) and Faust (1926) was invited to Hollywood by studio boss William Fox and the result was this extremely touching meditation on love lost and regained, as enchanting in its depiction of an impoverished but ultimately happy couple as Jean Vigo's later L'Atalante (1934). 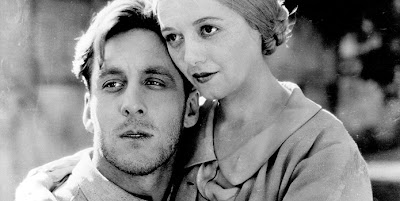 Sunrise's admittedly melodramatic plot concerning the adulterer's plan to  drown his wife by faking a boating accident on a lake comes from the short story 'A Trip to Tilsit' by German writer Hermann Sudermann but strongly echoes Theodore Dreiser's roughly contemporaneous An American Tragedy (1925). This parallel aligns Sunrise with George Stevens' adaptation of that work A Place In The Sun (1951) with Montgomery Clift and Liz Taylor, another bold and emotional account of a tortuous love triangle that was lapped up by the crowds.

Although Murnau's film is certainly firstly a touching romance, it is also a fascinating document of newly industrialised urban America, typified by its hectic tramways and night life. The experience of immersing oneself in it is a thrill that anticipates Dziga Vertov's Man With A Movie Camera (1929). 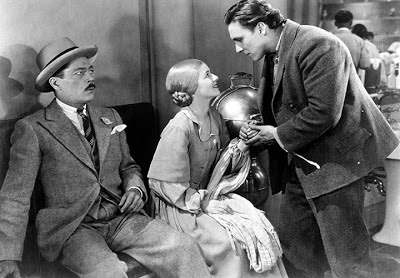 Murnau's genius is evident throughout Sunrise. It's there in his creepily unreal creation of a rural village presided over by an ominous full moon, in the devilish swirl of cigarette smoke about the black-clad city girl and in his deft use of tracking shots. However, it is perhaps Murnau's expert orchestration of tone that most impresses today. The film's mood evolves naturally from the grim menace of the rowboat scene in which the reality of what's about to happen dawns on the terrified wife to the transitional light comedy of the barber's shop and the gaiety inspired by the escaped piglet at the funfair. A truly remarkable artifact, all told.
Posted by Joe at 16:53