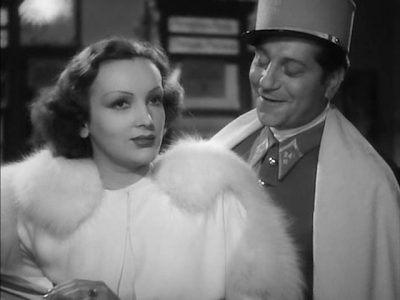 "The public, which swallows many affronts, would undoubtedly feel that they were being taken for a ride if screenwriters presented them with a happy ending for Jean Gabin."
- André Bazin, What Is Cinema? Volume II (1971)

Jean Grémillon's fraught love story, an adaptation of André Beucler's 1926 novel, opportunistically reunited Gabin and Mireille Balin following their appearance together in Julien Duvivier's wildly popular Algiers gangster caper Pépé Le Moko (1937). The result proved to be this neglected director's biggest commercial success but today it stands as something of a forgotten masterpiece. Gabin is on top form as Lucien Bourrache, a charismatic marshal with French colonial cavalry regiment the Spahi known for his way with the ladies and by the nickname "Gueule d'Amour" (loosely translated as "Lady Killer" but really more like "Love Jaws"). Stationed in Orange, Bourrache has his pick of the town's widows, wives and maids, all of whom gaze longingly after the gallant Legionnaire, but instead he falls for cool, cynical Parisian aristocrat Madeleine (Ballin) whom he encounters while on leave in Cannes, ultimately quitting the army to pursue her. What follows is the tale of a Don Juan degraded, as Lucien finds himself manipulated, humiliated and scorned by Madeleine and sneered at by her effeminate butler and horrid mother until he can take it no longer and strikes out in brutal fashion.


Grémillon's films have been routinely overlooked by the anglophone critical establishment over the last half century but a recent revival at the Edinburgh Film Festival may do much to revive his reputation outside of France. The reason for the director's obscurity over here is not itself clear cut, as academic Ginette Vincendeau pointed out in her introduction to the film at the BFI screening I attended last night. A contemporary of the period's great "poetic realists" like Duvivier, Jean Renoir, Marcel Carné and Jacques Feyder, Grémillon had been a music student before he turned his hand to documentary filmmaking, eventually finding his way into features but enduring such an unhappy relationship with the studios that he would ultimately be driven to drink. He was criticised for spending time in Germany in the late 1930s - Lady Killer was largely filmed at UFA's studios in Berlin with the assistance of the great German cinematographer Günther Rittau - even though he was a passionate supporter of the Resistance during wartime. He also endured several years of self-imposed exile in Spain, so it's possible that his own willingness to disenfranchise himself from his illustrious peers has hurt his standing. Whatever the reason, the quality of his craftsmanship is not in question. 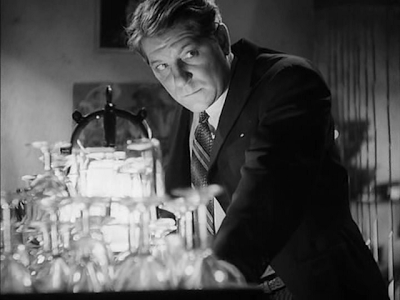 One of the most interesting aspects of Lady Killer is its core misogyny (perhaps another reason the director has failed to find favour, although I understand the film is a completely atypical example of Grémillon's treatment of women). Balin's character is as casually nasty and plausible a femme fatale as they come, the cruel treatment she subjects Lucien to recalling Joan Bennett's abuse of Edward G. Robinson in Fritz Lang's later Scarlet Street (1945). Meanwhile, from a modern perspective at least, there's a definite homosexual undercurrent to Lucien's friendship with René (René Lefèvre), his army buddy turned doctor, who is also led up the garden path by Madeline. Their Gallic kiss on the cheek at the train station at the film's close may be intended as a moment of brotherly solidarity or a tender tribute to the man Lucien once was, but it looks much more like heartbreak at a lover's parting. Grémillon himself was bisexual and his own attitudes bring enormous colour and complexity to the relationships on show.
Posted by Joe at 17:15