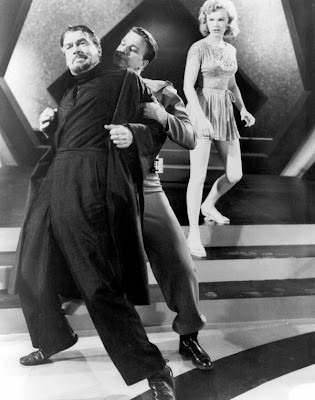 Fred McLeod Wilcox's Forbidden Planet for MGM proves to be an amazing mix of Freudian theory, Shakespearean allusion and technophobia set to the world's first fully electronic film score, courtesy of maverick Greenwich Village husband-and-wife team Louis and Bebe Barron. The story concerns Commander John J. Adams (Leslie Nielsen) and the crew of United Planets Cruiser C57-D, who touch down on Altair IV in search of survivors from a failed exploration mission 20 years earlier. There they encounter Dr Edward Morbius (Walter Pidgeon), a genius living in isolation with his virginal daughter Alta (Anne Francis), who informs Adams that his colleagues were exterminated one-by-one by a mysterious planetary force soon after landing. When Adams and his warm-blooded subordinates begin to take a romantic interest in Alta, the invisible monster returns to slay them, prompting the commander to further investigate Morbius. The latter admits that he's been using the technology of a long-extinct race of superbeings who once inhabited Altair IV, the Krell, to build his splendid home there, a revelation that causes Adams to guess the unnerving truth about the malevolent creature and its origins.


The conflicted Morbius stands in for Prospero in an inspired relocation of The Tempest (1610) to outer space by writer Cyril Hume, with Alta an otherworldly Miranda and the "Monster of the id" akin to the brutal savage Caliban. While these parallels are interesting, they are not the primary focus of Hume's screenplay. Instead, the writer presents us with a psychological drama in which Morbius is so unsettled at seeing the oedipal paradise in which he dwells with Alta invaded by the rescue mission that his subconscious mind, facilitated by the advanced Krell technology, lashes out by manifesting a monster to destroy all those who threaten his queasy domestic arrangements. This reading places Adams in the role of the detective psychoanalyst and also means that the film advocates emotional and sexual repression. "We're all part monster in our unconscious. That's why we have laws and religion", Adams states, later ordering Alta, the free-spirited nature girl who cavorts with deer and tigers, to cover up in the name of earthly modesty. The film's conservatism is also extended towards technology, cautioning against its falling into the wrong hands and having the army step in to save the day and even commandeer Robby the Robot, Morbius's automaton butler. Morbius is meanwhile punished for playing god like so many meddling scientists in 1950s sci-fi and its precursors, encountering himself (figuratively) in the depths of the universe, just as Sam Rockwell's technician does (literally) in Moon (2009), and not liking what he sees. 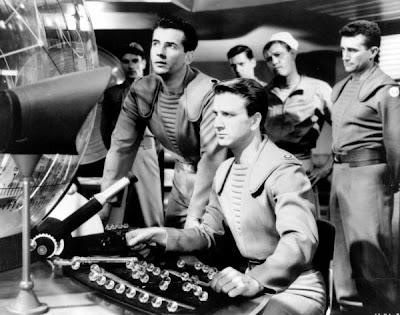 In addition to its innovative, experimental soundscape, blurring atmospheric Theremin effects with eerie bleeps and zaps, Forbidden Planet features some wonderful matte painted planet backdrops and a number of stylish sets (Morbius's home was memorably likened to Frank Sinatra's Las Vegas living room by Ridley Scott in the 2005 documentary Watch The Skies!) as well as a witty script well played by a sporting cast. However, for my money, it's a touch too heavy on exposition scenes and a little too light on incident to retain one's interest throughout. As with Richard Fleischer's 20,000 Leagues Under The Sea two years earlier, we are invited to marvel at the spectacle on show, cutting edge at the time, but somehow there's not quite enough narrative invention to sustain the film in spite of its bold themes. Nevertheless, Forbidden Planet is a cute piece of work that has left a lasting cultural legacy. Its name lives on in a chain of sci-fi memorabilia shops and its opening starship scenes seem an obvious inspiration for Gene Roddenberry's original Star Trek series (1966-69), with the teleport beams a clear lift. 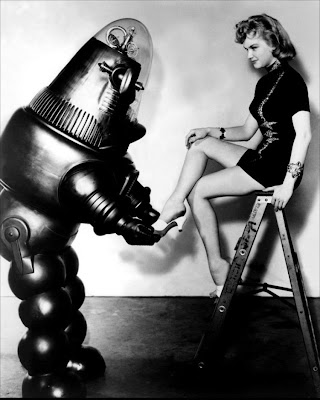 And then of course there's Robby. This clanking tin Arial, first sketched by washing machine designer Robert Kinoshita and built for the princely sum of $125,000, went on to become one of the most enduring and popular of all 1950s sci-fi creations. On the back of Forbidden Planet's success, Robby starred in his own film, The Invisible Boy (1957) directed by Herman Hoffman, in which he befriends the young son of a mathematics professor before being reprogrammed by an evil supercomputer determined to hijack the US space programme. After this highly eccentric but charming outing, Robby paid the rent by making numerous guest appearances in TV shows like The Twilight Zone (1959-64), Lost In Space (1965-68) and Wonder Woman (1975-79). The highlight of this run is perhaps the 1958 'Robot Client' episode of The Thin Man (1957-59), starring Peter Lawford and Phyllis Kirk, in which Robby is framed for murder by a lab assistant terrified of his potential in relation to the development of atomic power. Robby is still working today, appearing in a promo for General Electric just last year. This metal manservant deserves to live on forever for his delivery of Forbidden Planet's most risqué line. Alta summons him and is frustrated to find him slow in arriving at her side, prompting her to ask where he's been. "I was just giving myself an oil job", he replies, as deadpan and inscrutable as ever.
Posted by Joe at 11:17