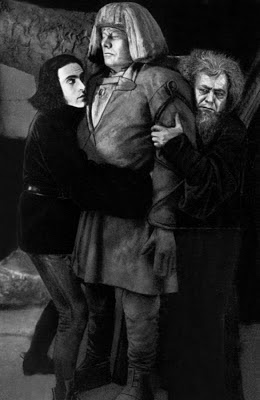 German director Paul Wegener plays the titular monster himself in this marvelously creepy expressionist horror from the golden age of U.F.A. The Golem is an old Prague legend about a mystical colossus sculpted from clay by the benevolent Rabbi Loew and brought to life with Hebrew incantations in order to protect the inhabitants of the city's Jewish ghetto from anti-Semitic prejudice and persecution. This was Wegener's third crack at the tale, having directed a version in 1915 that he was not entirely satisfied with and a parodic short two years later, The Golem & The Dancing Girl, both of which are now sadly lost. You can see his surviving Golem in its entirety below for precisely nothing.


A peculiarly potent and enduring myth, the Golem is a man-made monster that turns on its Promethean creator: the story therefore shares superficial similarities with Mary Shelley's Frankenstein (1818). It was the subject of a strange, dreamlike novel by Austrian bank clerk turned occultist Gustav Meyrink in 1915, which was reportedly a direct reference point for Wegener, and could also be said to have lived on through the tradition of superhero comic book writing. After all, Superman was created in 1938 by two Jewish writers, Jerry Siegel and Joe Shuster, just as the Nazis came to power in Germany, a time when the Jews of Europe once more found themselves forced to bow their heads and pray for deliverance. Batman, another champion of the people, made his debut appearance in Detective Comics a year later and was also the product of Jewish invention, the caped crusader later battling a villain who resembled the Golem in the shape-shifting person of Clayface. The Golem thus remains a symbol of man's undying hope of release from toil and oppression, particularly as technology advances and the possibility of automata aiding and enhancing our working and domestic lives becomes ever closer to reality. The word "robot", incidentally, like the Golem, also originates from the Czech Republic. It was first used by the satirist Karel Čapek in 1920, the year of Wegener's film, in the title of his play R.U.R. about a factory that builds artificial humanoids. The idea must run in the very waters of the Vltava.
Posted by Joe at 11:49