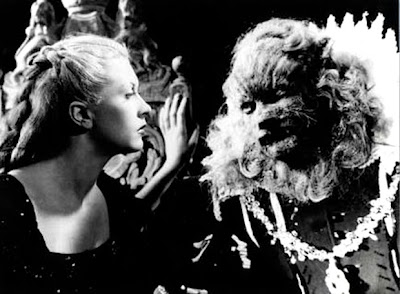 French poet Jean Cocteau's famous fairy tale adaptation is simply unutterably lovely, a work of art approaching perfection in its execution and which has unquestionably added to the sum of gross human happiness ever since its premiere in the midst of postwar depression and austerity. I grew up with the Disney animation from 1991, which drew heavily on Cocteau and is also charming, although I can see now that it could never hope to match the atmosphere and feeling of its inspiration.


Starring Josette Day and the director's lover, Jean Marais, Cocteau's film of Jeanne-Marie LePrince de Beaumont's 1756 version of the tale is unfailingly visually inventive and makes inspired use of theatrical trickery. From the uncanny arms emerging from the walls of the Beast's castle to bear its candelabra to the roving eyes of its statues, there are endless wonders here. The influential leonine make-up in no way hinders Marais' capacity for expression, as can be seen above in his alarming first appearance, accosting Belle's father (Marcel André) for plucking a rose from his enchanted garden. Although the Beast may initially frighten us, Cocteau follows the best traditions of European children's literature by reminding us that the only real monsters in the world are human: Belle's vicious sisters (Mila Parely, Nane Germon) and her self-indulgent, vain father, whose financial naivety and complacency have brought the family to ruin. This is a romance, however, and the avarice and narcissism of Belle's relations merely add bold secondary shading to the splendour Cocteau conjures in the foreground. It is perhaps a little perplexing that we should feel a pang of regret for the passing of the Beast when he casts off his fur only to assume the physical form of Belle's wastrel suitor, Avenant, but the strangeness of this finale, and the lovers' subsequent heavenly ascent, only adds to the film's dreamlike quality.
Posted by Joe at 13:42