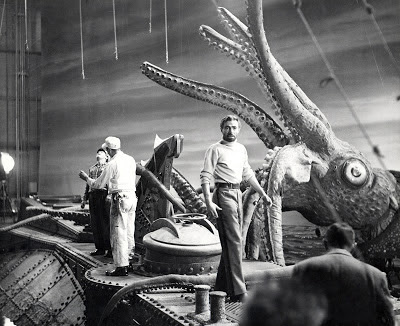 James Mason makes for a stern and immovable Captain Nemo in this ambitious CinemaScope Jules Verne adaptation from Disney, an early example of the summer blockbuster two decades before Jaws (1975). Verne's tale of the misanthropic steampunk submariner who forsakes humanity to live below the waves dates from 1870 but touches on a number of enduring concerns, most notably the horrific potential of scientific advancement in the wrong hands. Professor Pierre Aronnax (Paul Lukas), an interloper aboard Nemo's Nautilus, begs the ingenious captain to share his ship and its wonders with the world for the greater good but Nemo declines, preferring instead to act as an anti-colonial moral avenger, using the craft to sink slave boats regardless of the human cost of his actions. Aronnax is particularly anxious to know what powers the Nautilus, a vessel at once an ornately decorated Victorian drawing room and a powerful deepwater battering ram. Nemo never reveals the answer but it's a particularly pertinent question that would have had uncomfortable resonances for an Atomic Age audience. Verne was clearly a man as visionary and ahead of his time as his protagonist. 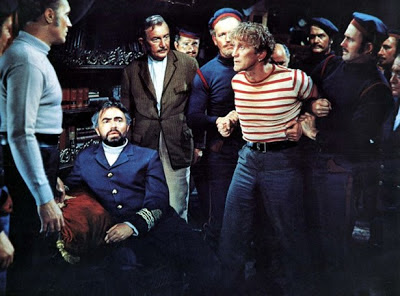 Truth be told, once Professor Aronnax, his assistant Conseil (Peter Lorre) and boisterous American harpooner Ned Land (Kirk Douglas) have been taken aboard the Nautilus, Fleischer's film fast runs out of radium. However novel, the murky seabed setting ultimately creates longueurs and there is simply insufficient incident to hold the attention outside of an agreeably rickety battle scene with a giant skid. Douglas is entertaining singing comic shanties, brawling with Nemo's crew and befriending his pet seal Esmeralda, but the energy he brings to the piece is at odds with Mason's grave and thoughtful turn. Nemo is a man governed by hate and fixated on the tragedies of his past and the actor treats the character with the seriousness he deserves. Lukas is also good value as the voice of reason but it's sad to see Lorre again reduced to comic sidekick status.


The beautifully designed sets used for the interiors of the Nautilus would ultimately be reused at Disney World to create a popular ride. This theme park afterlife provides a parallel with the same studio's more recent Pirates Of The Caribbean franchise (2003-11), which was famously a Disney attraction before it was spun off into a lucrative box office plundering series that also served up a bevy of deranged captains, spectacular ships, extrovert character performances and a cannibal island chase remarkably similar to that involving Ned Land in Fleischer's film.
Posted by Joe at 16:50