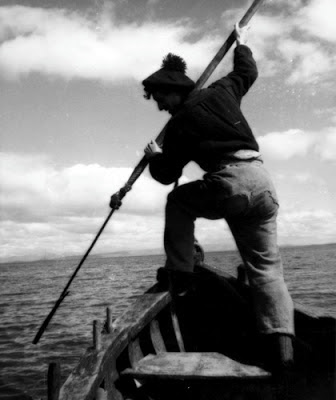 Irish-American Robert J. Flaherty, often called the "father of the documentary", shot this amazing record of the lives of fishermen on the remote Aran Islands off the west coast of Ireland using funds from Michael Balcon's Gainsborough Pictures. Flaherty had originally been an explorer and had once discovered an island of his own in Canada's Hudson Bay. Turning to film as a means of exploring his fascination with remote and exotic communities existing in harsh conditions (he thought of himself as a Thoreau figure: "I haven't much use for towns"), Flaherty's previous career highlight had been Nanook Of The North (1922), but it was Man Of Aran that proved his masterpiece, nabbing the "Mussolini Cup" at the second Venice Film Festival and a legion of admirers, from Orson Welles to Luchino Visconti.

Flaherty's Man Of Aran introduces us to the inhabitants of this barren trio of rocky outcrops and chronicles the daily hardships they face. These isles have no natural resources whatsoever, meaning the redoubtable rogues who live there even have to create their own artificial soil from rubble, sand and seaweed just to be able to plant potatoes. Equally, much of their time is consumed hunting down monstrous basking sharks in order to have enough blubber to boil for lamp oil. The Aran Islanders are nevertheless happy and Flaherty captures them about their business in no little style, creating a vivid impression of the violence of the waves, the bitter chill of the wind and their unrelenting but cheery struggle to survive. Not since J.M.W. Turner exhibited his first oil painting, Fishermen At Sea, in 1796 has the peril of depending on the whims of the ocean for a living been so vividly conveyed.


Although it has been criticised for fabrication (the family depicted were not really related and the premodern fishing practices shown had been abandoned half a century before), Man Of Aran remains rightly celebrated for its astonishing seafaring photography, a logistical triumph given the cumbersome and unwieldy nature of early film cameras. One far-sighted contemporary reviewer for the Sunday Express put it best when he wrote on April 29 1934: "This is a film which will influence directors all over the world. They will now perceive that there is drama in simplicity. One defiant face looking at the Atlantic after nearly meeting death can be a bigger thrill than hordes of tough guys retreating from the cops."
Posted by Joe at 21:19