The Creature From The Black Lagoon (1954) 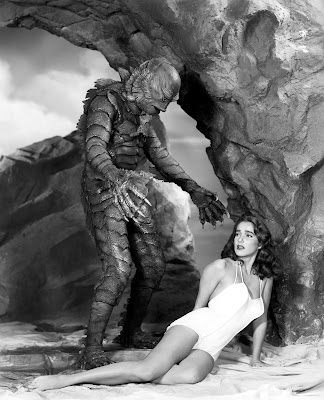 As Marilyn Monroe points out to Tom Ewell in The Seven Year Itch (1955), Gill Man isn't so bad, he just wants to be loved. This was a common trait among B-movie monsters of the fifties, most of whom aped King Kong's pursuit of unavailable women, with dear old Robot Monster probably the horniest and loneliest of the lot. Still, it's hard to disagree with fish boy's taste in abductees: Julia Adams is quite lovely and marvellously athletic. The scene in which she and this scaly evolutionary nightmare perform a sychronised swimming act together in the depths of the Amazon (without her even realising it) is as startlingly beautiful as it is unsettling. In fact, the film's underwater cinematography is probably its finest asset, other than the exceptional creature design by Millicent Patrick, whose contribution was not properly acknowledged for over half a century. Hats off to her then and to James C. Havens, who handled all scenes shot below the waterline while Jack Arnold directed the bickering expedition party aboard the Rita. Also deserving of a nod are Ben Chapman and Ricou Browning, the poor devils inside the rubber suit tasked with bringing Gill Man to life. You can check out some superb behind-the-scenes action shots from the making of the movie over at Spin Serpent, incidentally. 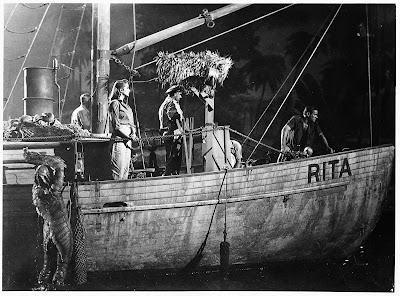 Thematically, Universal's 3D extravaganza is another revenge-of-nature horror but its script (apparently spun out of an anecdote about legendary mermen told at a dinner for Citizen Kane in 1941) explicitly draws parallels between its marine biologists' journey into the heart of darkness with modern space exploration. The fear of uncharted species and the possibility of other worlds representing new dangers discussed in Arnold's film caused critic Peter Biskind to label it a conservative cautionary fable, warning Americans against the dangers of straying from home. But take heart: the chances of running into a prehistoric aqua beast in Brazil or anywhere else are reassuringly remote. If you're planning on going to the 2016 Olympic Games in Rio, you should be fine.
Posted by Joe at 17:10