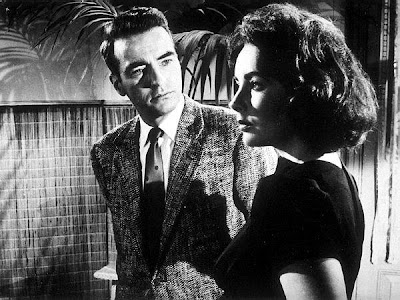 Tennessee Williams was the hottest ticket on Broadway in the fifties and Hollywood wasted no time in adapting his work for the big screen, often drafting in the playwright himself to knock out a script. Indeed, a small cottage industry soon erupted to capitalise on booming demand for the writer's popular melding of psychological trauma, steamy sexuality and expressionistic Southern Gothic stylings. Warner Brothers proved quickest on the draw, releasing their version of The Glass Menagerie starring Kirk Douglas and Jane Wyman in 1950. Elia Kazan's A Streetcar Named Desire (1951) for Warner and Richard Brooks' Cat On A Hot Tin Roof (1958) for MGM remain the best remembered of the Williams adaptations of this period, but I've always been fond of the hysterical Suddenly, Last Summer from Joseph L. Mankiewicz. This balmy, stifling melodrama was produced by Sam Spiegel and shot at Shepperton Studios in Surrey (those extras playing lunatic asylum inmates all look unmistakably British), boasts a script by novelist Gore Vidal and an enviable cast, which makes particularly inspired use of the great Katharine Hepburn's arch and haughty persona. 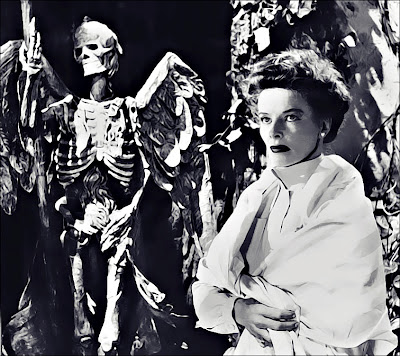 Not long after he was badly disfigured in a serious car wreck and only hired at the insistence of Taylor, a sickly Montgomery Clift stars as Dr John Cukrowicz, a Chicago surgeon relocated to a rundown New Orleans mental hospital to specialise in lobotomy. Exasperated by the institution's lacklustre facilities, Cukrowicz gladly accepts when wealthy local widow Violet Venable (Hepburn) demands an audience. It transpires that Violet is still grieving for the loss of her son Sebastian, an aesthete and poet, who perished the summer before while holidaying in Spain and is demanding that Cukrowicz employ his skills on her niece, Kathy (Taylor), a disturbed young girl who remains traumatised by the same circumstances that led to Sebastian's death. Cukrowicz meets Kathy, who appears perfectly sane, if a little bi-polar, and resolves to help her, ignoring her aunt's attempts to blackmail him into hurriedly carrying out an operation in exchange for a shiny new hospital wing.


Clift anchors the film as the doctor-turned-detective tasked with unraveling the mystery of what really happened to Sebastian Venable in the summer of 1937, the key to Kathy's "sickness", but it's really a two-hander, with the honours just about even between Hepburn and Taylor. The stately Katharine is astonishing in the opening scene with Clift in which she descends from the ceiling in her customised gilded elevator, discoursing on Byzantine emperors and proceeding to chronicle her deeply unhealthy relationship with her son in a conservatory stuffed with primordial hothouse flowers. Hepburn was famously indignant about the way she and her fellow cast members were treated on set, storming off after her final scene, spitting at Mankiewicz and calling Spiegel "just a pig in a silk suit who sends flowers". Crumbs. Meanwhile Taylor is increasingly impressive (and no stranger to Williams country), absolutely nailing her final monologue, in which Sebastian's horrific demise is finally recalled in a sleazy and nightmarish flashback implying rent boy cannibalism, no less. A genuinely haunting episode that's beautifully played by an actress whose skill is too often neglected in favour of smirking about her admittedly farcical private life. Her co-star in that intense psychodrama, Richard Burton, would, incidentally, appear in John Huston's The Night Of The Iguana (1964), the film that marked the end of Hollywood's feverish enthusiasm for exhausting the Tennessee Williams back catalogue.

The Ramones - Teenage Lobotomy
Posted by Joe at 21:52