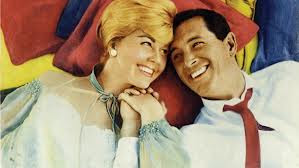 "The woman on our party line's a nosy thing,
She picks up her receiver when she knows it's my ring..."
- Hank Williams, 'Mind Your Own Business'

The first of three romantic comedies matching Doris Day with Rock Hudson was this massive box office hit directed by Michael Gordon for Universal. Day, that saintly icon of all-American virginity, was apparently extremely nervous about tackling such risqué material but finally dared to risk her Colgate commercial image and the result remains a sparklingly witty affair that benefits enormously from her bravery and considerable comic talent and timing.

She stars as New Yorker Jan Morrow, an interior decorator routinely frustrated by her inability to make phone calls from her apartment as a result of having to share a party line with a noted local lothario. That beast turns out to be none other than Brad Allen (Hudson), a Broadway composer and serial womaniser who just so happens to be the best friend of millionaire Jonathan Forbes (Tony Randall), an amiable neurotic besotted with Jan. She and Brad regularly bicker over the phone before he comes to learn of his social connection to her and exploits it by posing as a wealthy Texas rancher, "Rex Stetson", only to fall in love with her and realise the need to find a sensitive way to tell her that Brad, whom she hates, and Rex, whom she loves, are one and the same person. 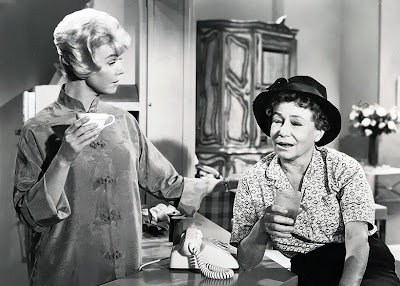 Day and Hudson are superb here and have fun with a delightful script from Clarence Greene, Stanley Shapiro, Maurice Richlin and Russell Rouse, the latter, amazingly, also having worked on D.O.A. (1950). This quartet's screenplay is stuffed with excellent lines and a great deal more eyebrow-raising innuendo than I'd expected: "I have no bedroom problems. There's nothing in my bedroom that bothers me", Jan huffs at Brad's probing insinuation. "Oh, that's too bad..." he sneers. Their plotting also makes good use of theatrical farce conventions, notably the identity confusion engineered by Brad, whose fraudulent hayseed persona mirrors Tony Curtis duping Marilyn Monroe into loving "Shell Oil Jr" in the same year's Some Like It Hot and also looks ahead to the country boy in the Big Apple fantasy of Midnight Cowboy a decade later. Hudson's imitation of a very specific kind of female fantasy man is spot on and a cruelly accurate skewering of his target's ideal.


Given its period, Pillow Talk features a number of other significant shocks, including a scene in which Day and Hudson flirt with each other from their respective baths via telephone and are separated only by a splitscreen that might as well not be there.

Jan branding Brad a "sex maniac" is also a surprise, but it's a slander that's perhaps justified given the secret buttons he keeps hidden in his bachelor pad to turn the sofa into a bed and automatically lock the door whenever he has female company to entertain. This is a detail that must unavoidably appear creepy to modern eyes, although Pillow Talk is hardly Shame (2011).

Another example is Brad trying to put her off his alter ego by hinting that Rex might be gay ("There are some men who... hmmm... how shall I put it? Well, they're very fond of their mothers... They like to share bits of gossip... collect recipes"). Her horrified and indignant reaction to this idea is especially priceless. In even raising this question, however, especially in the light of what we now know about Hudson's own homosexuality being hushed up by the studios, Pillow Talk was daringly ahead of its time.

It is also right on the money in highlighting the disapproval and judgement single career girls in the city faced (and still face) from the more conservative corners of society and in showcasing the evolving role of women generally. Jan refashioning Brad's apartment into a ludicrous parody of an exotic harem at the film's climax (before, presumably, changing it back into a tasteful home once they are married) is a metaphor for the modern woman remoulding wolfish old chauvinists, showing up and shaking out their hoary, patronising attitudes and remaking them into something more feminised and enlightened.

It would probably be too much to claim this dated little fifties "sexcapade" as a feminist milestone, but Pillow Talk did engage with its zeitgeist impressively and in so doing anticipated the Sexual Revolution that would follow, making it an ancestor to those groundbreaking primetime TV shows that reinvented the portrayal of single women, such as The Mary Tyler Moore Show (1970-77), Murphy Brown (1988-98) and Sex & The City (1998-2004).

What is certain is that Pillow Talk is a rare example of an older movie that is entirely 100% remake-proof, as technological advances have long since rendered the party line laughably obsolete.
Posted by Joe at 21:09