Edmond O'Brien stars in this almost comically frantic noir as Frank Bigelow, a small-town accountant and notary public, who refuses to commit to his secretary and girlfriend Paula (Pamela Britton) and instead takes himself off to San Francisco for a long weekend alone in order to clear his head. Heading out on the town with a party of boozy businessmen staying in the same hotel, Frank gets his drink spiked at local jive joint The Fisherman, after which he begins to feel ill and visits a doctor, who promptly concludes that he has been mortally poisoned with a luminous toxin, giving Frank little more than 24 hours left to live. Rather than submit to bed rest, however, Frank sets out in search of his assassins, determined to thwart their conspiracy and therein give meaning to his premature demise. 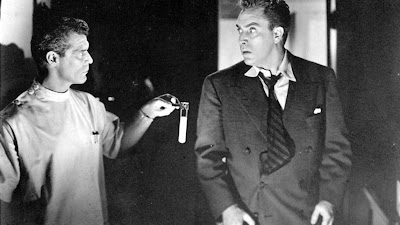 As effective as Rudolph Maté's film is, its ludicrously hectic pacing and ever-growing web of shady characters consistently threatens to bewilder. You half expect Bigelow to drop dead from exhaustion long before his radiation sickness takes hold, given the sheer amount of running around he gets through evading mobsters and hunting down clues. However, D.O.A. has plenty to recommend it, from its dramatic opening ("I want to report a murder...") to its novel premise, in which the victim serves as his own detective, and the committed and intense central performance of its underrated star. There's also an especially creepy supporting turn to relish from Neville Brand as psychopathic hood Chester. Director Maté began life as a cinematographer, photographing films for Carl Theodor Dreyer, Alfred Hitchcock and René Clair among others, and makes a good fist of capturing the seedy underbelly of urban California, its sweaty, chaotic waterfront Beat clubs and bustling sidewalks. The film's nuclear age concerns - the bad guys are involved in the black market trade of stolen iridium - aligns it with Robert Aldrich's Kiss Me Deadly (1955) while its script by Russell Rouse and Clarence Greene is laced with neat ironies, as critic Foster Hirsch has noted. Typical of these is the fact that Bigelow's sad predicament actually helps to focus this flaky and indecisive individual for the first time, spurring him into action and forcing him to shape up, look clearly at his life and realise his love for Paula. This interesting character arc calls to mind Dr Johnson's marvellous maxim: "Depend upon it, sir, when a man knows he is to be hanged in a fortnight, it concentrates his mind wonderfully". D.O.A. presents a bleak picture of an America helpless in the face of organised crime and is now in the public domain, so you can view in its entirety for precisely nothing right here. Do so.
Posted by Joe at 19:38