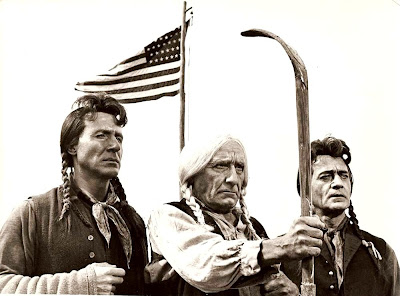 John Ford's final Western was this overlong but visually stunning account of the Northern Cheyenne Exodus of 1878-79, which saw the starving, displaced tribe lose patience with the US government's failure to provide for its people after dumping them on an arid reservation in Oklahoma and head north in search of their old buffalo hunting grounds in Wyoming. Mexican actors Ricardo Montalbán and Gilbert Roland play Cheyenne elders Little Wolf and Dull Knife, who lead the seemingly hopeless trek home before being driven apart by desperate circumstances, while Richard Widmark stars as Captain Archer, the conscience-troubled US Cavalry officer charged with pursuing and containing the Cheyenne but unable to muster much enthusiasm for the job knowing full well the poverty and neglect these dignified, stoic people have suffered. Among Archer's troop, Mike Mazurki is memorable as a Polish-born sergeant reluctant to be made a Cossack, having left behind their horseman's cruelty in the Old World, and Patrick Wayne, son of John, makes an impression as an impetuous young lieutenant out for revenge for the death of his father, long lost in the Indian Wars. Edward G. Robinson also pops up as Carl Schurz, Secretary of the Interior, and Karl Malden makes much of his role as Captain Oscar Wessles, a cornered German captain prone to hiding behind orders and shirking personal responsibility.


An apology for the plight of Native Americans and their treatment by the white man from a director who frequently depicted them as villains (think of murderous Comanche chief Scar in The Searchers, 1956), Cheyenne Autumn is a lavish production on an impressive scale, rightly cherished for its heartfelt sorrow and sympathy and for Oscar-nominated cinematographer William H. Clothier's handsome Technicolor photography. However, it is undeniably a much less tight and disciplined work than some of Ford's best. I personally could have done without the comic interlude in Dodge City, featuring knock-about cameos from James Stewart, Arthur Kennedy and John Carradine as Wyatt Earp, Doc Holliday and crooked gambler Major Jeff Blair playing poker and gadding about with rustlers and hookers, a sequence that provides an unwelcome tonal interruption and was cut from some versions of the film's release by Warner Brothers, in spite of its star turns. A strange decision by Ford to revisit characters he had already had the final word on in My Darling Clementine in 1946 and not an entirely successful one.
Posted by Joe at 12:58