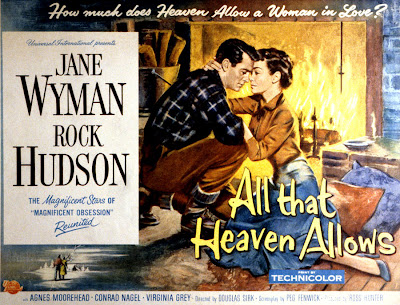 Douglas Sirk again teamed Jane Wyman with Rock Hudson, following the success of the previous year's Magnificent Obsession, for this exquisite cross-class romance about affluent New England widow Cary Scott (Wyman), who falls for tree surgeon Ron Kirby (Hudson) only to cave in to social pressure from the snobbish country club set and end the relationship, before realising her mistake when he is badly injured in an accident. Like its predecessor, All That Heaven Allows is as unashamedly theatrical in its plotting as it is heavy-handed in its themes and symbolism (the smashed Wedgewood teapot, the deer at the window) but manages to transcend its obviousness to become a thing of beauty and surprising power.


Sirk once more presents us with a sumptuously photographed model American town before scratching beneath the surface to reveal the sadness and want that is the inevitable consequence of the oppressive conformity required to build and maintain it. For Wyman's genteel Cary Scott, a college graduate turned homemaker who embodies Betty Friedan's "problem that has no name", self-denial for the sake of social approval is both pointless and guaranteed to spawn a lifetime of unhappy spinsterhood sat alone in front of the television because the community she aspires to please is fundamentally corrupted by plenty and entitlement. The townsfolk, typified by resident bitch Mona Plash (Jacqueline De Wit) and drunken lecher Howard Hoffer (Donald Curtis), are cruel, prurient, grasping and anxious for scandal, anything to distract them from the "quiet desperation" Thoreau diagnosed. Sirk makes inspired use of reflective surfaces to capture Cary's unhappy mirror image and therein repeatedly emphasise that she is imprisoned by her privilege: status symbols and the material trappings of success are just that, traps. Cary will only ever escape by biting her thumb at prevailing attitudes and following both her own heart and "nature boy" Kirby's example, as his bohemian friends Mick and Alida Andersen have done, even if moving into that lovingly renovated watermill home means incurring the resentment of her own waspish, self-involved offspring. 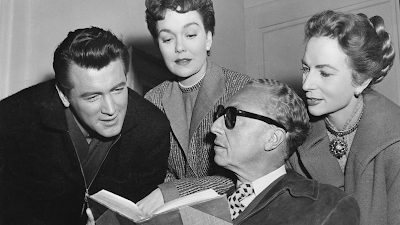 All That Heaven Allows improbably takes its title from the notorious Earl of Rochester's poem 'Love and Life' and was remade by Rainer Werner Fassbinder as Ali, Fear Eats The Soul in 1974 and effectively again by Todd Haynes in his 2002 Sirk homage Far From Heaven. It also struck me as clear influence on Tim Burton's popular Beauty and the Beast fable Edward Scissorhands (1990), in which another unconventional and lonely gardener, this time a man-made goth and a specialist in topiary rather than silver-tipped spruces, falls for a suburban girl before similarly suffering persecution at the hands of a torch-wielding mob of bored middle class housewives.
Posted by Joe at 13:51