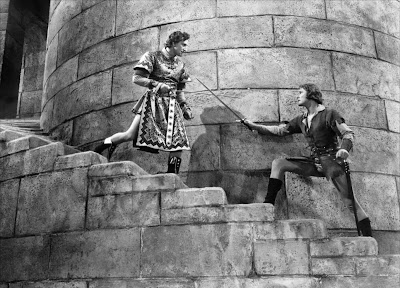 When I was a kid, Kevin Costner's Robin Hood: Prince Of Thieves (1991) was wildly popular, despite the horrid power ballad from Bryan Adams that accompanied it and the utterly implausible inclusion of Morgan Freeman among the cast as a very token Moor. Although it was a pretty serviceable modern take on the well-worn folk hero and benefited enormously from Alan Rickman's delightfully hissy performance as the Sheriff of Nottingham, I always preferred Mel Brooks's zany spoof, Robin Hood: Men In Tights (tagline: "The legend had it coming"), which appeared two years later to send up the unlikely early nineties revival of interest in all things Sherwood Forest sparked by the Costner hit. That film starred Cary Elwes doing an excellent imitation of Errol Flynn in his most famous swashbuckling role, so it was great to finally see the man himself don the Lincoln green leggings in this lusty, primary-coloured medieval romp from Warner Brothers.

The energetic Tasmanian inherited the role of Robin of Locksley from Douglas Fairbanks after James Cagney dropped out (!) and his take on the character presents "the best-loved bandit of all-time" as a puckish nature boy, a hearty and cheerful presence equally at ease chewing venison haunches with the peasantry as he is lightly leaping from the castle walls or swinging from the chandeliers, certain in his opposition to unfair taxation and tyranny. Flynn's Robin is clearly the right man to unite Merrie England against Claude Rains' fey usurper Prince John and his prissy henchman Guy of Gisbourne (Basil Rathbone) and his defiant speech to rally the Saxon villagers against their Norman oppressors is suitably stirring and patriotic (not to mention timely in 1938). Olivia de Haviland meanwhile makes for a strong, questioning Maid Marian but is soon won over, although one can't help but wonder if Robin might not really prefer the attentions of Will Scarlet (Patric Knowles), an interestingly passive figure more often seen dishing out thoughtful one-liners and strumming his lute than firing arrows or engaging in daring-do. Elsewhere, screwball comedy hero Eugene Palette pops up as Friar Tuck, doing battle with the rebel outlaw waist-high in river water for the sake of a stolen leg of mutton. The secondary romance between Merry Man Mutch (Herbert Mundin) and Marion's nurse Bess (Una O'Conner) also provides some agreeably earthy background shading. Mostly directed by William Keighley but completed by Michael Curtiz, this Technicolor beauty stages the mass brawls well and cracks through all of the story's key events - Robin's staff battle with Little John (Alan Hale), the archery contest, the escape from the gallows - at a fair old pace and remains highly entertaining.
Posted by Joe at 11:48