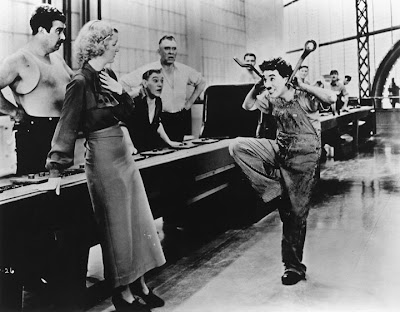 This evening I was lucky enough to catch a screening of Charlie Chaplin's immortal satire Modern Times at London's Royal Festival Hall featuring live accompaniment by the Philharmonia Orchestra conducted by Carl Davis. The film was showing as part of the 'America 1900-1950' strand of the Southbank Centre's monumentally ambitious year-long festival of programmes addressing the evolution of 20th century classical music, The Rest Is Noise, inspired by critic Alex Ross's 2007 book of the same name. Chaplin famously composed his own scores, although he had a little help this time from Alfred Newman and a young David Raksin (best known for his theme to Otto Preminger's Laura, 1944). His original music for Modern Times, which included the hit song 'Smile', has recently been restored and revised by Timothy Brock and it was this version that so delighted the audience tonight. 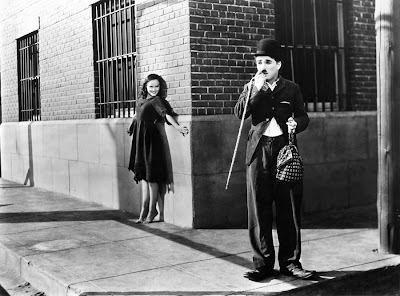 I'd forgotten quite how packed Modern Times is with event and invention, from Charlie's mad rampage around the Electro Steel Corp. factory frantically tightening the buttons, nipples and noses of his colleagues to his accidental arrest as a union agitator and the extraordinary scene at the jailhouse in which he liberally peppers his lunch with cocaine by mistake, a scene that makes inspired use of the comedian's expressive features. His romance with Paulette Goddard's barefoot wharf rat is as lovely as I'd remembered and the scenes in which he fantasises about their setting up house together and entertains her by roller skating blindfolded around a department store at night are hard to beat for sheer romantic enchantment. This latter interlude actually got the biggest reaction out of the Festival Hall audience tonight - a collective intake of breath as Charlie skates perilously close to a ledge several times without even knowing it. A staggering feat of bravery from an auteur truly committed to his art. 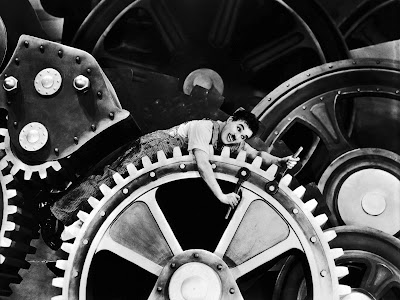 Chaplin's comedy was, of course, entirely serious in its intention, namely to boost national morale during the breadlines and turmoil of the Great Depression by providing cheer, solace and sympathy to the downtrodden. This is cinema  as public service. The optimistic ending in which he and Goddard link arms and march on along the highway and into the sunrise together brilliantly encapsulates his message but also preempts Jack Kerouac and the Beat Generation in stressing the promise of freedom and a brighter tomorrow represented by the open road. Modern Times is also an inspired and enduring workplace satire - the depiction of the steel company's president sitting in his office doing jigsaw puzzles and reading the funny pages before spying on his employees via closed circuit television, ordering them back to work, is as pleasing today as it must have been in 1936 and anticipates Orwell's Big Brother 12 years before Nineteen Eighty-Four was written. Chaplin also winningly asks, "What price progress?", and decries the dehumanising process of the industrial age. The production line leads to the madhouse, he tells us. The iconic image of Charlie trapped among the cogs of The Machine stands for all time. However, for me, it's the prototype force-feeding machine that really hits home, lampooning an era obsessed with maximising productivity and anticipating the star's barracking of "machine men with machine minds and machine hearts" in his powerful closing speech to The Great Dictator in 1940.
Posted by Joe at 23:53