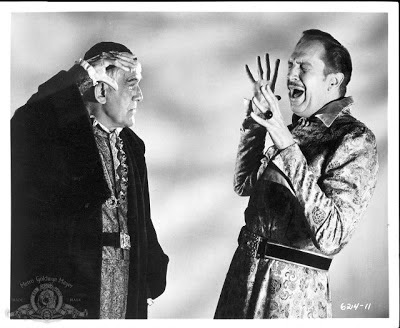 Like The Misfits, this entry in Roger Corman's Edgar Allan Poe series is a rare opportunity to see a number of beloved stars together in one place, with Vincent Price, Boris Karloff, Peter Lorre and even a young Jack Nicholson all gamely taking part. Unfortunately, that place is the same old rickety cliff top castle with a poorly painted backdrop of a stormy sea behind it. This time, Corman's improbable Gothic fortress provides the setting for a face-off between a trio of rival sorcerers in what turns out to be a whimsical comic horror trashing of Poe's deathless narrative poem. 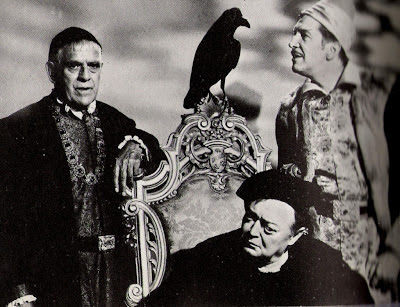 Beginning "once upon a midnight dreary", Corman introduces us to Price's lonely wizard Dr Erasmus Craven (oddly, the rhyme is never commented upon), whom we find, appropriately, moping alone in his chambers, gripped by "sorrow for the lost Lenore". Sure enough, the ill-omened bird comes "gently rapping" but turns out to be an irritable and boozy Lorre, imprisoned in feathered form by the villainous Scarabus (Karloff). Having veered off into reasonably interesting territory closer to the old European folktale 'The Seven Ravens' than to Poe, the script by Richard Matheson then leads us to Scarabus's aforementioned stone manor, the cackling old goat residing within with the supposedly dead Lenore (Hazel Court) on his arm, jealously coveting Craven's powers. A series of not especially funny pre-CGI magical duels then take place, with Lorre seemingly eviscerated into raspberry jam at one point, before evil is overcome and nothing much is learnt by anyone.The Raven is the sort of head-scratchingly purposeless exercise in which having Price bump into an astronomer's telescope counts as comedy and is generally nowhere near as fine as Corman's earlier efforts like The Fall Of The House Of Usher (1960). Quite what the melancholy author would have made of his "rare and radiant maiden whom the angels named Lenore" being reinvented as a grasping strumpet is anyone's guess. Fans of the poem would be better off with the tried-and-tested 'Treehouse Of Horror' episode of The Simpsons or indeed Christopher Walken's spirited recital on the 1997 tribute album Closed On Account Of Rabies. Nevermore!
Posted by Joe at 21:44