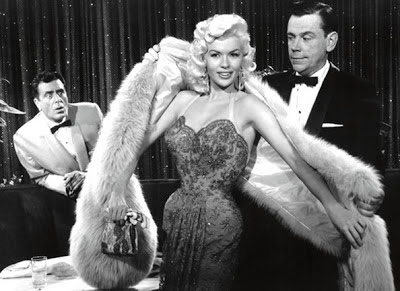 Tom Ewell's washed-up record producer gets more than he bargained for when mobster "Fats" Murdock (Edmond O'Brien) insists he make his girlfriend Jerri Jordan (Jayne Mansfield) a star in Frank Tashlin's cheery rock 'n' roll musical. Punctuated by musical interludes from guests including Gene Vincent, Eddie Cochran, The Platters, Fats Domino and Little Richard - who provides the title song - the film is sumptuously shot in DeLuxe Color and makes for an attractive vehicle for Mansfield even if the plot is ultimately a little thin. The aspiring starlet with an Achilles voice storyline feels borrowed from Singin' In The Rain (1952) while, as a satire of rock 'n' roll's get-rich-quick culture, The Girl Can't Help It ultimately only really amounts to a mild ribbing, even if it does have its merits. Arguably, Tashlin's film is of most interest today as a time capsule, filled as it is with fifties artifacts and attitudes, and for the impact it had on a young John Lennon, who saw it in a flea pit cinema in Liverpool as an impressionable teenager.


Ewell fumbles charmingly after his co-star just as he had over Marilyn Monroe in Billy Wilder's The Seven Year Itch 12 months earlier, O'Brien climbs the walls and chews the curtains and Mansfield is as sporting as ever, sashaying around night clubs in a red dress that would make Jessica Rabbit think twice, suffering all manner of innuendos and leers and rising to it by clutching twin milk bottles to her breasts in what must have seemed outlandishly risqué fashion at the time. Jayne does have some more challenging moments, however, and handles them well. Director John Waters, who had Divine parody Mansfield to hilarious effect in his notorious Pink Flamingos (1972), has even gone so far as to compare the scene in which she wistfully proposes to Ewell's Tom Miller that they spend Thanksgiving together, knowing all along that it cannot be, to a Douglas Sirk melodrama. She is certainly touching and obviously much more than a mere Marilyn parody. Former animator Tashlin also shows plenty of flair, notably in the film's very meta opening with Ewell and the scene in which the spectre of Julie London haunts the drunken Miller, her former manager, with a ghostly rendition of 'Cry Me A River', which is genuinely unusual and weirdly reminded me of Scottie Ferguson's troubles in Vertigo (1958).
Posted by Joe at 21:01