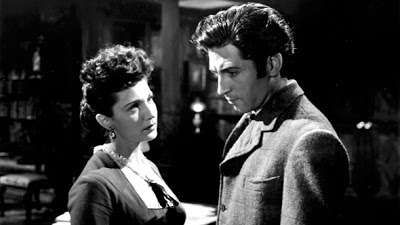 Ulsterman Brian Desmond Hurst directed this rare non-Hitchcock Daphne Du Maurier adaptation for producer Filippo Del Guidice's Twin Cities company, just after the latter had been taken over by J. Arthur Rank. The result, scripted by the novelist with support from future director Terence Young, is a well crafted if overly serious costume melodrama (perhaps trying too hard to avoid comparisons with Gainsborough's bawdier historical romps), which ultimately ends up overreaching itself. The story concerns landowner "Copper John" Brodrick (Cecil Parker), who constructs a mine on top of the titular mound in County Cork in order to dredge up the red metal and make his family's fortune. He succeeds, but not without making enemies of the rival Donovan clan and losing his favourite son in tragic circumstances. Dennis Price plays his misunderstood and unloved second heir, "Greyhound John", who finally wins the hand of local minx Fanny Rosa (Margaret Lockwood), only to father a feckless third generation of Brodricks who proceed to squander the riches of Hungry Hill and die pointlessly.

As a production, Hurst's film is hard to fault and notable for a ballroom scene whose opulence is worthy of Ophüls and Visconti. Until, that is, the fiddler gets carried away and the party breaks up into a wild Bacchanalian jig on the manor lawn. However, proceedings ultimately overrun and much is lost when Price departs and is replaced onscreen by his namesake offspring (Dermot Walsh), a selfish, oedipal and sodden soldier who's harder to sympathise with. Lockwood tries to hold it all together with a selection of grey wigs to convey her advancing years but somehow it's just not quite enough. The casting reunites her with Parker following their appearance together in Hitchcock's The Lady Vanishes (1938) and also sees a 19-year old Jean Simmons and young Anthony Wager return from David Lean's Great Expectations (1946). 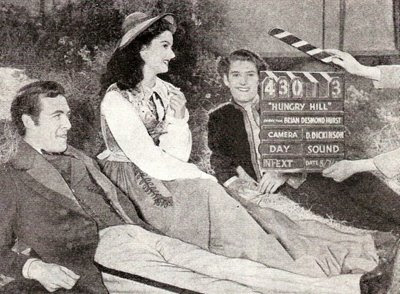 The screening of Hungry Hill I attended at the BFI Southbank was introduced by Allan Esler Smith, the director's great great nephew. The speaker described his relative's early life, growing up in poverty in Belfast at the turn of the century as the seventh child of a shipyard welder, taking his first job in a linen factory, serving in Gallipoli in 1915 and finally relocating to Hollywood to learn his trade as an assistant to John Ford. Hurst went on to direct over 30 movies, including Dangerous Moonlight (1941) and Scrooge (1951), and lived his later years as an affluent swell, rolling around Belgravia in a brand new Bentley. An incredible journey, to be sure. Apparently directors Anthony Asquith, Carol Reed and Michael Powell all arrived on set to wish Hurst success with Hungry Hill on his first day of shooting at Denham Studios in London, a remarkable reminder of the diverse array of talent enlivening the British film scene at that time.
Posted by Joe at 12:23