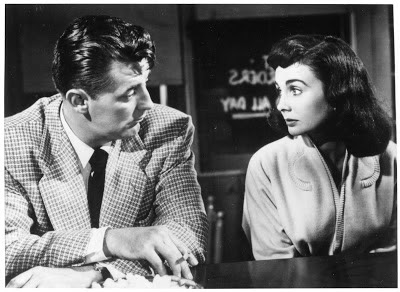 Ambulance driver Frank Jessup (Robert Mitchum) answers a call from the wealthy Tremayne family, arriving at their cliff top mansion in time to help save the life of the lady of the house (Barbara O'Neill), who has narrowly avoided being asphyxiated by a mysterious gas leak. Frank then meets her stepdaughter Diane (Jean Simmons), who appears less than delighted to hear of the matriarch's recovery but quickly takes a shine to him. A sweet slip of a girl devoted to her novelist father (Herbert Marshall), Diane moves quickly to inveigle herself in Frank's life, alienating his girlfriend (Mona Freeman) before promising to give him a job as her chauffeur and help bankroll his fantasy of owning an auto repair shop. However, when Mr and Mrs Tremayne suffer another accident, this time fatal, Frank finds himself accused of murder, with only smooth defence lawyer Fred Barrett (Leon Ames) standing between him and the gallows.


Otto Preminger was hauled in to make Angel Face, planned as a James M. Cain knock-off, by RKO's controlling owner Howard Hughes in order to take advantage of the 18 days left on Jean Simmons' contract, the English rose having recently had a violent row with the tycoon that ended with her hacking off her own hair just to spite him (those glossy raven locks belong to a wig). The result is another morose, masterful noir meditation on destructive sexuality from the director of Laura (1944) and Fallen Angel (1945) that remains ludicrously underrated, despite its having impressed Jean-Luc Godard in his Cahiers Du Cinema days. The film is notable for its genuinely shocking conclusion, some pacey court room scenes seven years before Anatomy Of A Murder and the haunting central performance of its starlet, cast against type, whose ghostly complexion practically promises death. Simmons seems to have channelled her fury with Hughes into her portrayal of Diane Tremayne, a pathologically jealous little daddy's girl as manipulative as they come and a serious contender for the ultimate femme fatale.

An early draft of Oscar Millard and Frank S. Nugent's script was called The Bystander and, unusually, Mitchum is just that. Playing a variation on his familiar tough loner persona, his Jessup is just another working class stiff, a war veteran with a steady girl and a good head on his shoulders who is nevertheless completely unable to extract himself from Diane's clutches. Both are partners in cruel self-justification, however, so perhaps they deserve their brutal end, which provides another example of mid-century America's queasy fixation with teenage car crashes, three years before the death of James Dean.
Posted by Joe at 22:11