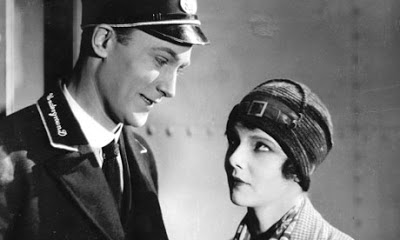 To mark the 150th anniversary of the London Underground, the BFI is re-releasing Anthony Asquith's superb silent thriller Underground in selected cinemas this month. Asquith's film was restored in 2009 and has now been given a witty new score by composer and accompanist Neil Brand, recorded live at the Barbican in October 2011 with the BBC Symphony Orchestra. Underground concerns itself with the sort of "ordinary workaday people whose names are just Nell, Bill, Kate and Bert" that are thrown together everyday in the democratic space represented by the capital's subterranean public transport system. The Bert in question is a really rather volatile electrical engineer who works at the Lots Road Power Station in Chelsea (played by the expressive Cyril McLaglen), who falls in love with fellow commuter Nell (Elissa Landi), a shop girl at Selfridges, Oxford Street, after spotting her one morning on the Bakerloo line. Nell, however, only has eyes for Bill (Brian Aherne), a thoroughly decent porter and ticket collector, who finds himself the focus of Bert's murderous jealousy once his overtures to Nell are spurned. 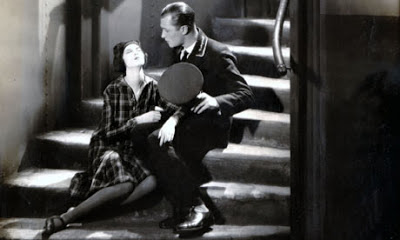 Asquith was the son of Liberal Prime Minister Herbert Asquith but became a committed socialist embarrassed by his aristocratic background, choosing a career in cinema and donning a boiler suit on set at a time when film was considered an utterly disreputable vocation. The young blue blood continued to direct until the mid-1960s, turning out a highly credible body of work that included such highlights as Pygmalion (1938), The Browning Version (1951) and The Importance Of Being Earnest (1952), but remained perennially unfashionable with critics. This only changed at all when the BFI restored his final silent film, A Cottage On Dartmoor (1929), in 2002, although he's still hardly a household name. It's a frightful shame that the poor fellow should be so neglected as he demonstrates considerable technical invention and skill in Underground, betraying a wide array of influences and almost out-Hitchcocking Hitchcock. The rooftop chase and brawl at the power station in particular recalls the Master of Suspense while an earlier fight in a pub, observed by a terminally unimpressed barmaid, is brought to life by a string of clever tricks, culminating in Bill throwing a punch directly to camera. An old lady passing by in the street outside who stops to put up her brolly as stray billiard balls come smashing through the window reveals the consummate ease with which Asquith could switch tone between violent action and comedy. Crowd scenes on escalators meanwhile bring to mind the frantic hive activity that Dziga Vertov made a speciality of capturing while the aftermath of Bert's electrocuting Kate (Norah Baring), the seamstress and fellow boarding house tenant he should have married, is shot in high German expressionist style. Elsewhere, the film packs in bags of native charm, notably in the dreamy picnic scene between Bill and Nell and the comedy of social observation that takes place aboard the Tube in the film's documentary-like opening. Passengers peer over one another's Evening Standards, look affronted when they aren't sufficiently thanked for giving up their seats and grimace in mock-disbelief when two gassing friends chat either side of them. Nothing changes.

Silent London has a magnificent scoop on the film, incidentally, some gorgeous on set pictures taken while Asquith's cast and crew were shooting scenes at Piccadilly Circus, courtesy of the London Transport Museum. For an alternative tribute to the Tube, meanwhile, this one is pretty hard to beat. 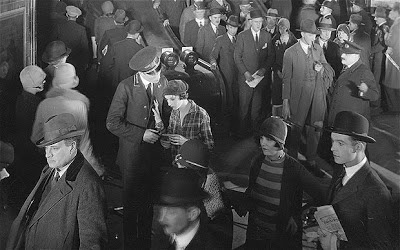 Another brilliant but otherwise unrelated cinematic event to check out if you're in London this week is the Hollywood Costume exhibition at the Victoria and Albert Museum in South Kensington, which is entering its final few days. I battled through heaps of snow, fashion students and gay men this evening to see such extraordinary icons of film history as Chaplin's Little Tramp outfit, The Dude's brown towel bathrobe and John Wayne's red bib-front shirt from The Searchers (1956). The exhibition showcases clothing sported by over 100 film characters and includes two velvet gowns worn by Vivian Leigh in Gone With The Wind (1939), Judy Garland's gingham pinafore from The Wizard Of Oz (1939), two Marilyn Monroe knock-outs, including the famous subway grate dress from The Seven Year Itch (1955), a selection of memorable get-ups from the respective wardrobes of Robert De Niro and Meryl Streep, Kim Novak and Tippi Hedren ensembles from Vertigo (1958) and The Birds (1963) and the costumes of any number of heroes and villains from recent blockbusters. Perhaps the most immediately striking items in the collection are the gothic pieces, notably those from Addams Family Values (1993), Tim Burton's Sweeney Todd (2007) and Bram's Stoker's Dracula (1992), with Gary Oldman's sprawling scarlet robe featuring intricate gold dragon embroidery arguably the finest thing on display. Well worth checking out before it closes on January 27th.
Posted by Joe at 22:28