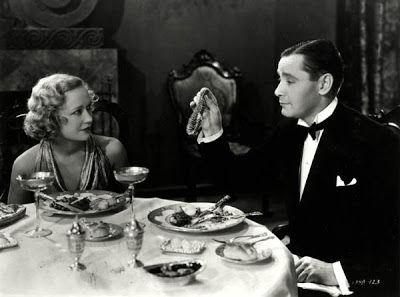 Happy New Year! Here's a doozy of a Christmas present to start 2013 off on the right foot, a superlative pre-Code Paramount comedy from Ernst Lubitsch, the tale of gentleman thief Gaston Monescu (Herbert Marshall) and pickpocket Lily (Miriam Hopkins) who join forces to defraud Parisian perfume heiress Madame Colet (Kay Francis) of her fortune, only for Gaston to fall in love with their prey after taking a job as her personal secretary. In a piece loosely adapted from Hungarian Aladár László's little-remembered 1931 play The Honest Finder, the leads are all charming in their very different ways, with Marshall unrelentingly formal as the professional fraud (his character inspired by the memoirs of real-life confidence trickster Georges Manolescu). The famously difficult Hopkins, a Southern Belle turned Broadway starlet,  is especially lively as a woman openly aroused by larceny, spitting out her lines with relish ("This is all that's real: money, cash!"). There's also a trio of very fine supporting performances to cherish, with the ever-reliable Charlie Ruggles and Edward Everett Horton priceless as feuding rival suitors after Madame Colet's scented hand and Robert Grieg betraying a wealth of experience as a huffing butler.

Jean Renoir, no less, told Peter Bogdanovich that Lubitsch "invented modern Hollywood" when he arrived from Germany in 1922, dragging the medium out of the D.W. Griffith-dictated grammar of the silent era and helping give voice to the talkies. "He brought European sophistication, candour in sexuality and an oblique style that made audiences complicit with the characters and situations", Bogdanovich adds, defining what became known as the "Lubitsch Touch". Trouble In Paradise, co-written by playwright Samson Raphaelson, author of The Jazz Singer (1924) and Lubitsch's regular collaborator, is a supremely elegant, cosmopolitan affair whose smart quips, wry playing and art deco sets look forward to everything from Fred and Ginger to Duck Soup (1933). Its aristocratic trappings recall the films of Max Ophüls while it has even been proposed as the first screwball comedy, predating Frank Capra's It Happened One Night by two years. While it would be a mistake to embark on Trouble In Paradise expecting the sort of zany farce typified by Bringing Up Baby (1938) or the exhausting, tongue-twisting dialogue of His Girl Friday (1940), the template is certainly there. However, it's also a subtle little gem in its own right that undoubtedly rewards repeated viewings. From its opening in the darkened canals of Venice to the barracking of Madame Colet for her decadence by a hairy Communist to the twin shadows of lovers kissing cast on a duvet, Trouble In Paradise is a jewellery box overrunning with fine things. 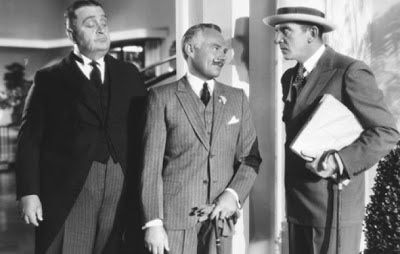 Recently spruced up for a very welcome Masters of Cinema DVD outing, having not been available to see anywhere between its release and 1968, Trouble In Paradise is presented with an accompanying essay by Raphaelson first published in The New Yorker in 1981 when he was 87, entitled, 'Freundschaft: How It Was With Lubitsch And Me'. In it, the writer describes the stilted, often downright stiff working relationship between himself and Lubitsch, a man he calls "cinema incarnate", as the two puffed on pipes and Upmann cigars and clacked out scripts for films like The Shop Around The Corner (1940) and Heaven Can Wait (1943) from the Berliner's rented Bel Air apartment. It's a story of muted mutual appreciation, glib professionalism and miscommunication, each party wrongly believing that the other had no more than a polite interest in their respective talents. "I felt that one of us had failed the other. Maybe the original fault was mine. How did he take my obvious lack of interest in movies?" Raphaelson wonders. A fascinating read, not least for the writer's revelation of this celebrated director's curiously myopic and dismissive attitude towards his own craft: "A movie - any movie, good or bad - ends up in a tin can in a warehouse; in ten years it's dust... You're smart that you stick with the theatre, Sam. What college teaches movies?"
Posted by Joe at 17:44