Cary Grant and Ginger Rogers certainly make a handsome couple in Leo McCarey's Once Upon A Honeymoon, but the film itself is an interesting failure of the well-meaning-but-deeply-misguided variety. Like To Be Or Not To Be directed by Ernst Lubitsch the same year or Howard Hawks's later I Was A Male War Bride (1949), McCarey's film for RKO attempts to graft a playful screwball comedy narrative onto World War II, with decidedly mixed results. Sheridan Gibney's script tells of American journalist and radio news commentator Pat O'Toole (Grant), stationed in Austria and working on an investigative piece about Baron Albrecht von Luber (Walter Slezak), an aristocrat whom he and his editor suspect of being "Hitler's finger man". When O'Toole learns that the baron is about to marry a naive American socialite named Katherine Butt-Smith (Rogers), who is really an ex-burlesque dancer from Brooklyn, he sees his chance at a major scoop, failing to factor-in the inevitably of his falling for her while Czechoslovakia and Poland fall to the Führer.

The leads are as exquisite as you'd expect and exhibit genuine chemistry, particularly early on when Grant is posing as an effeminate Viennese tailor sizing up Ginger with a tape measure and when they get sozzled in a hotel bar in Warsaw after he convinces her that "vodka" is the Polish word for "water".

However, as soon as McCarey begins splicing in real newsreel footage of Nazi rallies and Adolf Hitler posing triumphantly before the Eiffel Tower, Once Upon A Honeymoon stops being funny. For a breezy comedy, the film ends up showing us the assassination of a Polish general (Albert Basserman) by machine gun fire as his chauffeured car passes down the wrong street, an orderly's horrified face sprayed with blood, plus the murder of an American double agent posing as a Parisian portrait photographer (Albert Dekker) and, most shockingly of all, Grant and Rogers imprisoned in a concentration camp after being caught with Jewish papers by mistake.

Although unfailingly earnest and sympathetic and occasionally tub-thumpingly patriotic, Once Upon A Honeymoon is overlong and extremely muddled, which is strange given McCarey's deft handling of the war comedy subgenre in Duck Soup (1933). It even weirdly foreshadows Grant's role in Hitchcock's Notorious (1946) at one point, as the question of using Ginger as bait to entrap the baron is raised. The film's closing punch line, after our heroine has shoved the portly Nazi villain from an ocean liner into the Atlantic, is that the man couldn't swim, so there's no need for the captain to have turned his ship around to embark on a rescue mission - Baron von Luber having surely drowned by now. Odd, and too brutal even for black comedy. 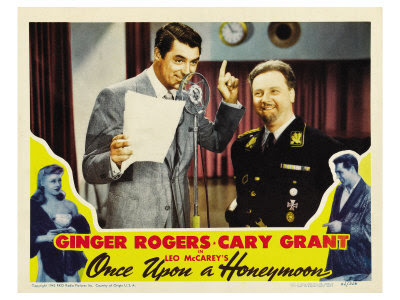 The film's shoot was apparently interrupted when a certain "Archibald Leach" enlisted in the US Army Air Corps having just been granted American citizenship and petitioned studio boss Jack Warner to intervene on his behalf when he was deemed too old to serve at 38. Hoping to be dispatched to officer candidate school in Miami Beach, Grant was disappointed when Washington ultimately decided he was too useful in a fundraising and morale-boosting capacity to risk in combat. Grant then issued a gracious publicity statement conceding that, "Uncle Sam knows best", and promptly married the recently divorced Woolworth department store heiress Barbara Hutton, whose $40 million fortune led the pair to be dubbed "Cash and Cary". Ironically, the need to press on with Once Upon A Honeymoon by this point meant that Grant and Hutton couldn't have one themselves.
Posted by Joe at 23:04