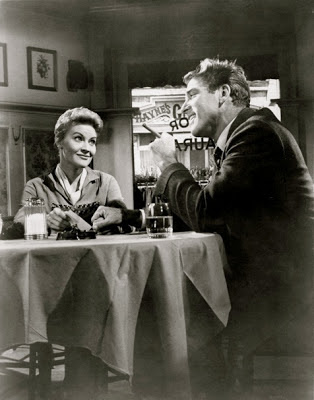 Last night I happened to watch this bold Sinclair Lewis adaptation, an attack on religious revivalism and the hucksterism that goes with it, only to learn this morning that one of its supporting players, 1950s country music star Patti Page, had died at the age of 85. A sad and strange coincidence. In truth, Page's role here, her first in a limited screen career, is a relatively minor one, although she's entirely convincing as wholesome gospel singer Sister Rachael. R.I.P. Patti. 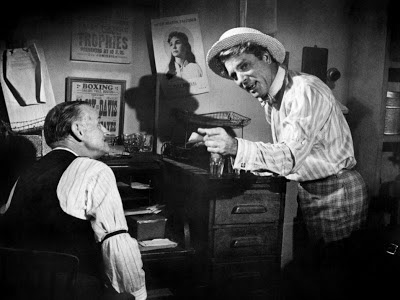 Richard Brooks' film is centred around another powerful performance from Burt Lancaster as the eponymous Gantry, a charismatic but decidedly desperate travelling salesman reduced to riding box cars and hawking vacuum cleaners while everyone else is enjoying the Roaring Twenties. Gantry eventually takes up with a tent show and reinvents himself as a hellfire evangelist in the Billy Sunday mould, hectoring rural audiences into hysterical repentance for their sins and bullying them into church attendance, much to the amusement of the show's star, Sister Sharon Falconer (Jean Simmons), and the consternation of her business manager, Bill Morgan (Dean Jagger). Embracing hypocrisy as breezily as he forsakes lonely women and whisky, Gantry begins to lust after the saintly icon and realises the considerable commercial possibilities of taking old time religion to wealthy Big City audiences. However, news of Gantry's growing fame reaches the ears of disgraced deacon's daughter-turned-prostitute Lulu Bains (Shirley Jones), who swiftly arranges to blackmail the cad who first led her away from the light, just after he's embarked upon a heavily-publicised moral crusade against speakeasies and cat houses. 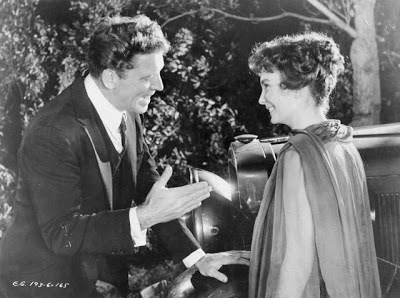 Wolves donning sheep's clothing to prey on the rural poor is a common theme in American cinema, from Robert Mitchum's psychotic ex-con reverend Harry Powell in The Night Of The Hunter (1955) to Ryan O'Neal as crooked Bible pedlar Moses Pray in Paper Moon (1973). Lancaster brings a touch of Jerry Lee Lewis to their ranks as Gantry, wild-eyed, irrepressible and dangerously manipulative, a man who would be equally happy setting fire to a piano as mocking the Darwinists with a hired chimp or speaking in tongues if it means a heavier collection plate. It's a complex performance, however, with Lancaster well worth his Oscar for making us pity this sleazy charlatan when he is pelted with eggs by the angry townsfolk and left standing alone and disgraced with a  'God Is Love' banner lying tattered at his feet. Gantry's moment of candid confession to Sister Sharon, in which he admits plainly that his former career was not quite as illustrious as he's led her to believe, is perhaps his most disarming trick of all. Simmons meanwhile is as pure and sincere here as she was playing the Salvation Army girl who wins Sky Masterson's heart in 1955's Guys & Dolls, deftly allowing Falconer's own unseemly ambition and cynicism to bob to the surface on occasion, while there's sound support from Arthur Kennedy as the film's voice of confirmed atheism, Zenith Times-Dispatch journalist Jim Lefferts, sent to cover the Sister Sharon road show and ultimately exposing Gantry, despite liking him personally*. Well acted and involving then but it's astonishing to hear that Brooks's Elmer Gantry accounts for just 100 pages of Lewis's 1927 novel, given that the film is almost as long as a modest Biblical epic. If it were to be made now, it's easy to see the project as a good fit for Paul Thomas Anderson. Indeed, Brooks's take would actually make a great double bill with The Master (2012).

*Painter George Bellows followed Billy Sunday while on a similar assignment for socialist magazine The Masses in 1923 and captured him in his famous lithograph Preaching. He later commented: “I like to paint Billy Sunday, not because I like him, but because I want to show the world what I do think of him.”
Posted by Joe at 20:23