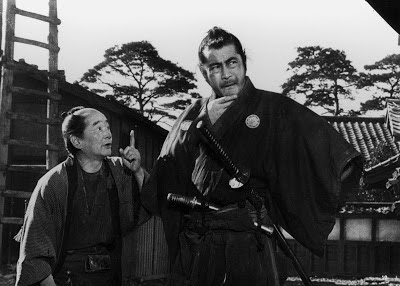 The great Toshiro Mifune ponders his next move as the wandering ronin in Akira Kurosawa's influential samurai actioner Yojimbo. The film was famously ripped off and remade by Sergio Leone as A Fistful Of Dollars (1964), just as Seven Samurai (1954) had been turned into The Magnificent Seven (1960), and it's easy to see why the Japanese director's films are so commonly alligned with Westerns. Yojimbo was itself inspired by John Ford's big skies and stand-offs, notable in its widescreen shots of the town's dustblown main street. However, it seemed to me that Kurosawa was indebted here to a less commonly cited American source: Pinkerton detective-turned-pulp crime novelist Dashiell Hammett. Yojimbo's bid to play a rotten rural backwater's warring gambling factions off against one another recalls the Continental Op's plan to "open up Poisonville from Adam's apple to ankles" in Hammett's Red Harvest (1929) while the savage beating and imprisonment he later suffers echo Ned Beaumont's plight in The Glass Key (1931). Unfortunately for me, it turns out that a number of more successful critics have already drawn these parallels. Bugger. Yojimbo also reminded me of Takeshi Kitano's Zatoichi (2003) and it turns out that Mifune reprised his role as the calculating samurai in an earlier entry of the blind swordsman saga, Zatoichi Meets Yojimbo (1970), essentially an Edo period crossover in the manner of old Universal horror dust-ups.

Although it's beautifully staged, I have to admit that I found Kurosawa's film a tad slow in places, with one too many sequences of Mifune thoughtfully sipping dishes of saké holding back the pace. However, it's all worth it for the magnetic central performance and the sudden bursts of slicing swordplay. Magic.
Posted by Joe at 16:15