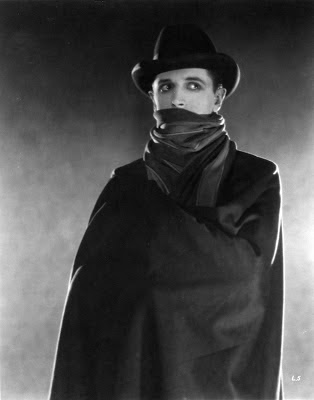 Still the best known of Alfred Hitchcock's silent output, The Lodger is a deeply unsettling London-set thriller about a serial killer known as The Avenger who picks off girls with golden curls on Tuesday nights before disappearing into the rolling Thames fog to evade capture. Evoking the mob hysteria of the Jack the Ripper slayings that had so terrified the capital 40 years earlier, Hitchcock's film for Gainsborough Pictures is taken from Marie Belloc Lowndes' 1913 novel and features many of the Master of Suspense's most celebrated tropes in embryonic form. This creepy tale concerns overbearing men attempting to impose control on iconic blondes, a wrong man trapped in a web of intrigue, confused sexual instincts leading to murder, play with handcuffs in advance of The 39 Steps (1935), a cameo from the director and the perversion of a leading man's carefully cultivated public image. The star in question is matinee idol and crooner Ivor Novello, who gives an utterly electrifying performance as the titular interloper, his handsome face riddled with guilt, torment and a sickly nervous compulsion, his disturbed lusts aligning him with Norman Bates. Novello is as strange and captivating in his way as Max Schreck was in Nosferatu (1922). Hitch's wife and long-time assistant Alma Reville provided a guiding hand creatively here while the atmospheric cinematography is courtesy of Italian baron Gaetano di Ventimiglia, his presence reflecting the cosmopolitan nature of early film-making in Europe, Hitch himself having spent time with the Expressionists at UFA in Weimar Germany (whose influence can be seen throughout The Lodger, notably via the light shining through the window into the landlady's bedroom). Producer Michael Balcon, the future head of Ealing Studios, was less helpful, unhappy with Hitch's handling of Novello's character and threatening to have the film canned before, fortunately, relenting. The mysterious tenant has meanwhile lived on as a plot device in cinema ever since, with nods to The Lodger appearing in everything from London Belongs To Me (1948) to The Ladykillers (1955) and Shallow Grave (1994).

As this is likely to be my final post before the big day, I'd just like to take the opportunity to wish you all a very merry Christmas and to thank you for reading Faded Video over the past year. Your support and encouragement has meant the world to this lone eccentric.
Posted by Joe at 21:19