Frank Capra puts the American Everyman on trial in Mr Deeds Goes To Town, the story of Longfellow Deeds (Gary Cooper), a greeting cards poet from Mandrake Falls, Vermont, who inherits $20 million when his financier uncle is killed in a car crash while vacationing in Italy. Deeds reluctantly leaves home, worrying about who will replace him on tuba in the town band, and visits New York City amid much press interest to collect his unwanted windfall. Deeds is promptly descended upon by a swarm of cynics and opportunists, grasping in-laws, greedy lawyers, swells and snide publicity pimps. Variously derided as a “yokel”, a “sap”, a “hick” and a “beau hunk” by the Big City hucksters out to co-opt him into their corrupt and jaded universe, Deeds is really “a fine fellow, very democratic ” and fights back against the “fakers” and “moochers” out to swindle him, often literally. Deeds doesn’t enjoy the trappings of wealth but is able to ignore the ridicule of the newspapers until he learns that the woman he’s fallen in love with, Mary Dawson, a lonely stenographer, is really Louise “Babe” Bennett (Jean Arthur), ace reporter at The Mail (an unfortunate choice of name for the periodical) under whose by-line the most intimate abuses have appeared. What’s more, it’s Babe who coined the one nickname that really stuck, “the Cinderella Man”. When a heartbroken Deeds decides to invest his money in farmland equipped with ploughs and livestock in order to support families hit hardest by the Depression, lawyer John Cedar (Douglass Dumbrille) steps in and tries to have Deeds certified as insane, spinning his idiosyncratic behaviour against him and calling in a Viennese quack psychiatrist to diagnose him as a manic depressive. Only the last minute intervention of the community can help Deeds rediscover his voice and speak for himself for the first time. 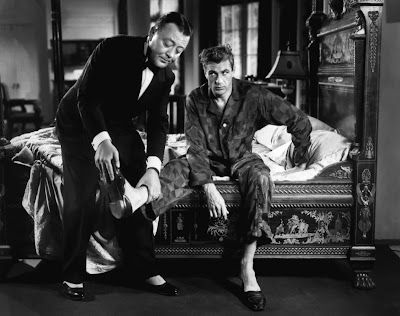 For the most part a pleasingly “pixilated” screwball comedy, Mr Deeds is also rather sadder and more haunted than I’d expected. Capra and co-writer Robert Riskin, the team behind It Happened One Night (1934), adapted their screenplay from ‘Opera Hat’, a short story that first appeared in The Saturday Evening Post in 1935 by Clarence Budington Kelland, a man who once described himself as “the best second-rate writer in America”. Deeds is a more worldly and two-fisted forerunner to “overgrown boy scout” Jefferson Smith, who would also be plucked from obscurity to shame the establishment with the good manners and simple decency it has forgotten in the rush for personal glory. Deeds is just as earnest, idealistic and patriotic as the future Junior Senator and just as keen to take in historic landmarks (Grant’s Tomb this time rather than the Lincoln Memorial) but seems less surprised by the moral decay he finds around him. As an uprooted rube myself, I particularly enjoyed this observation by Deeds on metropolitan life: "People here are funny. They work so hard at living they forget how to live." Cooper brings just the right balance of sensitivity and toughness to the role to make it a winner and is especially funny taking no nonsense (but the occasional Prairie Oyster) from his team of gay servants. The scene in which he beats up the literati at a swanky Manhattan restaurant after quickly realising he’s only been invited to their table to be laughed at is splendid and it’s hard to better the reaction of Walter Catlett’s drunken poet Morrow: “What a magnificent deflation of smugness!”

Deeds’ refusal to defend himself on the stand, however, having finally surrendered to disappointment and disgust as the country he loved prepares to argue that his altruism could only be the product of madness, is powerful stuff and anticipates both the strong, silent persona Cooper would bring to many a Western and to the suicidal despair of George Bailey in It’s A Wonderful Life (1946). Babe’s tears of guilt at the damage wrought by her caustic, amoral school of yellow journalism remind us of the preciousness and fragility of innocence in a savage and occasionally despicable world.
Posted by Joe at 17:59